Code Geass Wiki
Register
Don't have an account?
Sign In
Advertisement
in: Characters, The Black Knights, United Federation of Nations,
and 2 more

See The Order of the Black Knights

Although for a long time Lelouch remains the person behind the mask, throughout the conflict between Britannia and The Order of the Black Knights, Zero and his distinctive appearance remained a symbol of the anti-Britannian rebellion and the fight for an independent Japan.

Zero's fame quickly spread around the resistance groups throughout Japan. When Lelouch announced The Order of the Black Knights to the world, he remained its undisputed leader as Zero until the Black Rebellion, C.C. sometimes donning the costume to act as a decoy for him. Zero became a symbol in Japan and a messianic figure, even gaining support from Britannia for dealing with unanimously-denounced crimes such as drug trade. However, he became a symbol of controversy following the Battle of Narita, especially after Euphemia li Britannia was accidentally turned by Lelouch's Geass into an enemy of the Japanese and ordered their massacre.

During the first assault on Tokyo, however, Lelouch left the Black Knights behind to seek his kidnapped sister, Nunnally vi Britannia, but was captured by Suzaku Kururugi. In his absence, the Black Rebellion crumbled, and Britannia declared Zero executed to the world. Only a few knew that Zero was alive: Suzaku, Charles, V.V., C.C., Kallen, Shin, Villetta, Rolo and at least six remaining members of the Black Knights.

Although used primarily by one person, a total of three people have assumed Zero's identity throughout the series: the aforementioned Lelouch vi Britannia (as its owner and creator), C.C. (as a decoy and body double at least three different times), and Suzaku Kururugi (as part of the Zero Requiem). Kallen Kōzuki considered donning Zero after Lelouch fell into depression, but seemingly backed off once C.C. warned her of the high burden she had to carry with that mask. Ironically, one of the High Eunuchs briefly confused Kallen as Zero despite her only wearing a towel at the time.

After C.C. restored Lelouch's memories, previously modified by Emperor Charles zi Britannia when he was captured by Suzaku, Lelouch once again assumed the identity of Zero, announcing his return to the world and freeing and reforming The Order of the Black Knights. For a long time, many higher-ups in Area 11 did not believe him to be the same Zero who led the Black Rebellion. For a brief time during Lelouch's depression over Nunnally vi Britannia's plans to recreate the Special Administrative Zone of Japan, Kallen Kozuki considered taking over as Zero, C.C. remarking how metaphorically heavy the mask was.

Lelouch finally returned to his role and came up with a new plan to move some of the Japanese out of Britannian control. Per this plan, Zero negotiated his exile from Britannia in exchange for assembling one million people to participate in the Special Administrative Zone. However, what he actually did was distribute one million Zero costumes among the participants (including the Black Knights), thus making them all fall under the provision. These "Zeros" were evacuated to Penglai Island, which became the new headquarters of the Black Knights, having assumed the function of the United States of Japan's government-in-exile.

Some time prior to the creation of the United Federation of Nations, Zero became the official CEO of the Order of the Black Knights. However, after the Second Assault on Tokyo Settlement, Schneizel el Britannia revealed the truth about Zero's real identity and his use of Geass to the Black Knights, causing them to betray him. Lelouch fled from the Black Knights and Schneizel, rescued by his "brother" Rolo Lamperouge, and abandoned the Zero mask, acting publicly as Emperor Lelouch vi Britannia upon his ascension to the throne one month later. The Black Knights officially hid the truth about Zero's identity and escape, declaring him dead from his injuries in the battle.

In three months after Lelouch established himself as Emperor of Britannia, he built up a public image of a tyrannical enemy of the world. It was then that Suzaku Kururugi appeared in the Zero costume and assassinated Lelouch, thus fulfilling their plan for Zero Requiem. Per Lelouch's wish, Suzaku, officially believed to be killed in the assault on Damocles, continued his life as Zero, now considered saviour of the world, unable to show his face. As the second Zero and new leader of the Black Knights, Suzaku remained at Nunnally's side, and Schneizel, previously forced into serving Zero by Lelouch's Geass, turned his loyalty to the new Zero after the Emperor's death.

Zero (Lelouch) seems to follow the belief of "the ends justifying the means" and is willing to commit evil to destroy another evil. He does not appear to care who knows it, as he publicly declares that belief. Zero is shown to have little concern for innocent lives, shown when he mentions to Kallen about how innocent lives would have to be sacrificed. In the end, Zero states that his primary goal is achieving his own concept of justice and, in doing so, he is willing to do anything to achieve that justice. At first glance, Zero seems to have little concern for the lives of his subordinates. However, this is presumably a ruse as "all are pawns for Zero".

From the beginning, Zero was considered to be Britannia's sworn enemy and was indefinitely branded as a terrorist. Thus, as he killed many Britannian soldiers, this would also lead him to be hated by many Britannian citizens. As the Zero Requiem was completed, everyone in the world, including the people of Britannia, began to cheer for Zero's miraculous return; this later completely changes Zero's image from a symbol of terrorism to a representation of politics and peace.

The Zero costume consists of a tight dark purple suit (changed to a light purple in R2) with golden stripes, long wrapped sleeves, and a frilled white cravat. The outfit combines Victorian fashion with that of a sleek bodysuit; worn over it is a black and gold cloak with crimson spandex lining the inside and an enormous black cape encircling the head. Its immediately recognizable feature is a spiky black and indigo mask with a long variation of the Geass Sigil stretched over its bottom, completely hiding the wearer's face; the mask appears opaque from the outside but is actually transparent from the inside. By unknown means, a small part of the mask can be signaled to slide down, exposing the wearer's left eye; this feature was designed by Lelouch to let him use his Geass without revealing his face.

In this version, the Zero outfit is heavily armored and is manifested from Lelouch's Geass. The mask lacks the four spikes at the edges. He fights at the level of a Knightmare frame as well as any skilled pilots such as Kallen and Suzaku from his armour and cape. The ability of Lelouch's armour functions almost the same as a Knightmare Frame; for instance, his cape can create multiple sharp black whips similar to the Mark Nemo's Blonde Knives. Another ability it possesses is a system called D.O.M. Hostia or the D.O.M. system, which has the ability to control and disable a Knightmare. C.C also fills in as a body double as well. Its also capable of manifesting explosive sigils as well.

Suzaku as the second Zero. 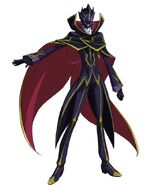 "I once more become Zero" ~Lelouch

Lelouch behind the Zero mask

Zero removed his mask infront of Cornelia and Others