Code Geass Wiki
Register
Don't have an account?
Sign In
Advertisement
in: Knightmare Frames, Technology, The Black Knights,
and 2 more

The 'Zangetsu' (斬月 Zangetsu) is an eighth generation Knightmare Frame constructed for Kyoshiro Tohdoh's personal use. It bears great resemblance to his old customized Gekka Kyoshiro Tohdoh Custom, retaining the same paint-job, shoulder armor and the hair-like attachments. Its performance is well above a standard Gekka, however; it is capable of matching some of the more advanced Britannian Knightmares.

While it carries the same single Slash Harken and Brake Sword (制動刀 Seidoutou) as Tohdoh's Gekka, it also implements some new gear, namely a pair of shoulder-mounted machine cannons and a Radiant Wave Shielding System. These new technologies would later be incorporated into the Akatsuki Command Model Zikisan. It can also make use of the same Air Glide Wing/Missile Launcher combo unit as the Akatsuki. In Power of Passion, it was seen to use its hair-like attachments as a shield against Lancelot Conquista's kick. In such occasions, it is referred as the Type-04/F1C Zangetsu Flight-Enabled Version.

The Zangetsu makes its first appearance during the kidnapping of Empress Tianzi fighting against Suzaku's Lancelot Conquista. It shows most of its new features against him, throwing him off guard, but he later on recovers. As the Black Knights are retreating with the Empress and are later pursued by the Chinese forces, the Zangetsu is deployed again to battle the Shen Hu. Later, at the Mausoleum of Eighty-Eight Emperors, it engages the Conquista again. During the Second Assault on Tokyo Settlement, it leads the remaining members of the Holy Swords to attempt an attack on Schneizel's ship. It makes its final appearance during the Battle of Mt. Fuji, during which the Zangetsu is badly damaged when Lelouch vi Britannia sets off a Sakuradite eruption from Mount Fuji to destroy a large portion of the Black Knights' forces. Even so, Tohdoh continues to fight until his machine is finally destroyed in combat with Suzaku Kururugi and his Lancelot Albion. 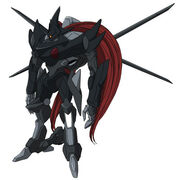 The Zangetsu is about to fire the Slash harken built into the pommel of its Brake Sword. 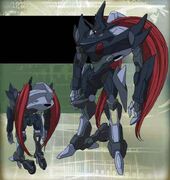