Yoshitaka Minami (みなみ よしたか, Minami Yoshitaka) is a bespectacled male with purple hair and is a core member of The Black Knights. His position was the commander of the First Secret Corps Commander and following the restructure, he became captain of the Ikaruga.

Yoshitaka Minami is a bespectacled male who was formerly a member of Naoto Kozuki's resistance team, before becoming a member of the Black Knights. He also became the Black Knights' first secret corps commander. In episode seven of R2, he is seen blushing when Nunnally is sworn in as Viceroy of Area 11. He is appointed as the captain of the Ikaruga following the formation of the U.F.N. He is last seen in Tamaki's bistro along with Sugiyama and Viletta. Minami was one of the few characters who escaped capture following the defeat of the UFN under Prince Schneizel and the capture of the Damocles and frees the UFN members after Lelouchs assassination.

Yoshitaka Minami is first seen with the other members of the Resistance at the Shinjuku Ghetto. He is with Ohgi firing a rocket launcher to buy some time for the Elevens to escape. After Zero makes contact with Kallen and Ohgi, Minami helps by piloting one of the Sutherlands he gave to them. He along with the other members watch the television as Zero makes his first appearance to rescue Suzaku Kururugi. He is later seen when the Black Knights announce themselves to the world after the Japanese Liberation Front Hotel Incident. During the Battle of Narita, Minami agrees to acknowledge Zero as their leader alongside the other members of the Black Knights.

During the Assault on Tokyo Settlement, Minami is seen at Ashford Academy after the Black Knights have taken it over for their HQ. He later communicates to Zero about the situation there and about Ohgi after he was injured by Villetta Nu.

However, after Zero had been apprehended by Suzaku, Minami along with the Black Knights could not stop the Britannians and were captured and arrested quelling the Rebellion.

Minami reappears in the second season when Guilford makes a public announcement to execute all the captured members of the Black Knights for the failed attempt of the Black Rebellion. He is rescued by Zero and the Black Knights and was also there during the conversation between Zero. As several key members accuse Zero of abandoning them, Tohdoh and Oghi back them up, prompting Minami to make a comment on how Zero considered Oghi nothing more than as a pawn. However, along with the other members, he chose to follow Zero once more.

He is later involved in the battle to capture Viceroy Nunnally but his time was cut short as he was not able to land on the ship since the Burai he was piloting was shot and destroyed. However, he managed to eject and yells to Tamaki, "What are you doing, Tamaki?" Minami later participates in Zero's plan to be exiled from Area 11. Following their exile, Minami is seen in the Ikaruga during the Battle at Xiaopei and Battle at the 'Mausoleum of Eighty-Eight Emperors' during their time in the Chinese Federation.

He is seen again during the ratification of the United Federation of Nations with a new position as captain of the Ikaruga. Minami and Sugiyama provide support to Ohgi and the others in the Ikaruga relaying orders during the Second Assault on Tokyo Settlement. Minami is later seen with the other core members of the Black Knights betraying Zero when he reveals his true identity as Lelouch vi Britannia. Then, he is seen in the Ikaruga during the Battle of Mt. Fuji following Lelouch's actions at the UFN meeting. During the midst of battle, the Ikaruga is caught in the explosion of Mt. Fuji and sustains heavy damaged. With the help of Kallen and Tamaki, the bridge of the ship was still intact and Minami was able to escape and retreat.

After the battle and time has passed since Lelouch has taken over the world, Minami appears once more with

what's left of the resistance consisting of Cornelia, Guilford, Xianglin, and Viletta. As they watch the public execution of the remainder of the resistance, they spring into action on Cornelia's orders after Suzaku as Zero appears. Afterwards, he witnesses Lelouch's death at the hands of Suzaku. Following the events that have happened, Minami is last seen at Tamaki's Bistro with Sugiyama and Viletta. It is also shown that he attended Ohgi and Villetta's wedding. 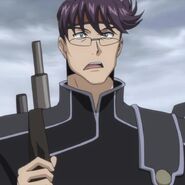 Add an image to this gallery
Retrieved from "https://codegeass.fandom.com/wiki/Yoshitaka_Minami?oldid=79772"
Community content is available under CC-BY-SA unless otherwise noted.