The 'Vincent Ward' (ヴィンセントウォード Vuinsentou Ōdo) is a highly efficient and powerful new seventh generation mass production model of Knightmare Frame produced for the Britannian Army. It was developed, following the success of the original pre-production Vincent and the later Vincent Commander Model, as the final mass production version of the Lancelot. Designated as the RPI-212B, the Vincent Ward currently serves as Britannia's mainline Knightmare unit, replacing the long running Sutherland and Gloucester machines.

With the rise of seventh generation Knightmare Frames becoming more and more common, the Britannian Military needed a new type of mass-production unit that was more effective and more powerful than the heavily outdated RPI-13 Sutherland and RPI-209 Gloucester, both of which were only part of the fifth generation and still in heavy use as the primary front line Knightmare units of the empire. The result of this demand was the production of the RPI-212B Vincent Ward. Developed based on the feedback and data from the prototype Vincent and the smaller scale produced Vincent Commander Model, as the next-generation of mass-production units, the Vincent Ward boasts a performance that vastly surpasses that of the previous 5th generation machines and a maneuverability which is similar to that of the original Lancelot.

Unlike the initial test Vincent and the later Vincent Commander Model units, the Vincent Ward noticeably differs appearance wise, with completely re-designed body and armor parts, the head being simplified and returning to the same military blue/purple with black secondary trim colors that was seen on the likes of the Sutherland. This was most likely done in order ease production costs, and to easily distinguish the Vincent Ward in battle from its higher performance counterpart, the RPI-212A Vincent Commander Model.

However, despite being an extremely efficient design, when compared to the previous Vincent models, the Vincent Ward's design underwent a number of simplifications in order to ease the mass production costs, including the elimination of much equipment (such as the extra shoulder mounted Landspinners) other than the enhanced Factspheres and fixed Lance-type Maser Vibration Swords (MVS), which return from previous models. Furthermore, the characteristic and powerful Needle Blazers that were located in the elbows are removed and replaced with fixed Stun Tonfas, a weapon that was seen equipped by the previous 5th Generation machines. This was mostly due to the fact that to produce Needle Blazers with the same Blaze Luminous technology seen in the predecessor units on such a large scale would be far too costly and could possibly hinder production time frames.

As for optional armaments, the Vincent Ward is shown to be equipped with standard weaponry from the previous generation of mass production units, such as Assault Rifles, Giant Cannons, and even the EM Jousting Lance used by the Gloucester (though this is only seen briefly in Oz the Reflection O2 manga). Like the Vincent Commander Model before it, the Vincent Ward can be fitted with an optional Float Unit backpack, consequentially changing the machine designation to RPI-212BFA Vincent Ward Air.

Vincent Wards were first deployed in .a.t.b 2018 during the Battle at the 'Mausoleum of Eighty-Eight Emperors' in the Chinese Federation, and see subsequent action in all later battles of the second season. Towards the end of the series, they, alongside the Vincent Commander Model and the Gareth, have largely replaced the Sutherland and Gloucester as the Holy Britannian Empire's primary Knightmare Frames. During Emperor Lelouch's reign, the Vincent Wards make up almost half of the Britannian Military's Knightmare forces.

In the second year of the Kowa era, after Lelouch's Zero Requiem plan, they are still used by the UFN, and some are seen during The Black Knights landing in Zilkstan, at the end of Code Geass: Lelouch of the Re;surrection.

A pair of Vincent Wards 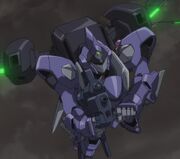 Lelouch's Royal Guards with their Vincent Wards and some remaining Sutherlands

Vincent Wards having their Float Units fitted alongside the Galahad 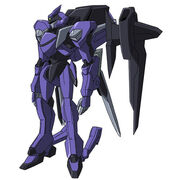 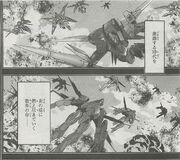