Start a Wiki
The Vincent GramNoir is the renovated Vincent Gram after it was recovered at the Longmen Grottoes following Orpheus's desertion. The unit is piloted by General Johann Schwarzer.

The Vincent GramNoir is the Vincent Gram renovated for General Schwarzer after Orpheus left the Glinda Knights. Functionally identical its previous version, the white on it has been painted black, and its head has been replaced by a standard Vincent head.

The Vincent Gram was developed from an early Vincent prototype model to Lyre's specifications, his wishes influenced it's development. All weaponry is built directly in to the frame so that both hands can be used at all times. The right shoulder contains a Hadron Blaster, while the left shoulder contains a new weapon called the Wolves Tooth. The Blaze Luminous mechanism on the left arm also can generate a drill-shaped Luminous Cone. 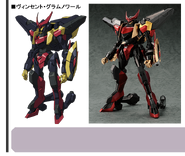 Add an image to this gallery
Retrieved from "https://codegeass.fandom.com/wiki/Vincent_GramNoir?oldid=69304"
Community content is available under CC-BY-SA unless otherwise noted.