The Vincent Gram is a custom variant of the Vincent used by the new Head Knight of the Glinda Knights, Lyre.

Developed from an early Vincent prototype model to Lyre's specifications, his wishes influenced its development. All weaponry is built directly in to the frame so that both hands can be used at all times. The right shoulder contains a Hadron Blaster, while the left shoulder contains a new weapon called the Wolves Tooth. The Blaze Luminous mechanism on the left arm also can generate a drill-shaped Luminous Cone.

Like the Lancelot Grail, the Vincent Gram can dock the Bradford to its back in "Direct Link" mode, and becomes the Gram Air Cavalry.

The Vincent Gram is a Knightmare Frame developed from a prototype model of the Vincent. It is first fielded in a.t.b. 2018 in Area 24, formerly Spain. It is piloted the Glinda Knight's new Head Knight, Lyre.

A combined Knightmare formed from the Bradford (in Fortress Mode configuration) docking to the back of the Vincent Gram in "Direct Link" mode. Similar to the Grail Air Cavalry, the Vincent Gram acts as the main unit while Bradford serves as a support pack, directly connecting the Yggdrasil Drives of both frames and giving the Vincent Gram the ability to fly. The linkage between the two frames is performed by automatic guidance. 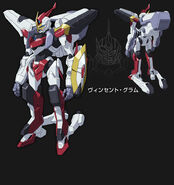 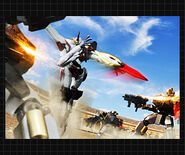 Vincent Gram fighting Amanecer on the streets of Madrid

Vincent Gram finishing the last remnants of the Wings of Talleyrand

Vincent Gram fighting Amanecer near the ruins of Longmen Grottoes 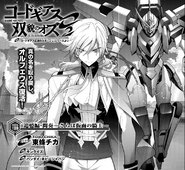 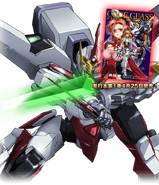 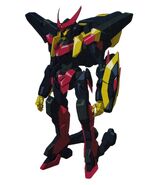