The RPI-212/G Vincent Glinda is a variant of the RPI-212 Vincent used exclusively by the Glinda Knights that appears in the Oz the Reflection O2 manga and photo novel.

A variant of the Vincent used exclusively by Princess Marrybell mel Britannia's personal forces, the Riddel Knights, the Vincent Glinda is painted red with gold accents like the other mass-produced Knightmares used by the Glinda Knights and its OS incorporates combat data from Oldrin Zevon and the other Glinda Knights, enabling even less skilled pilots to perform on the same level as a ace. Its fixed armaments are identical to those of the initial mass production prototype Vincent but the blades of its lance type MVSs turn yellow when activated. In addition, the Vincent Glinda can also be equipped with a variety of hand-held weapons including a standard assault rifle with an integrated over-barrel grenade launcher, a large cannon, and an anti-Knightmare lance. As a variant of a mass production prototype, the Vincent Glinda is a high performance machine but is equally expensive to produce though Marrybell has secretly secured funds to procure 88 of these machines for the Riddel Knights whose existence has been kept secret from both Britannia and the rest of the Glinda Knights.

The Vincent Glinda was first deployed during the extermination of the Star of Madrid in which the Riddel Knights ambush and annihilate the Spanish resistance group when Marrybell uses herself as bait to lure them into a trap.

The Riddel Knights are later deployed in their Vincent Glindas to annihilate the Ventas Ghetto and its inhabitants under orders from Marrybell but are opposed by the Glinda Knights' head knight Lyre. 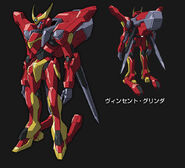 Vincent Glindas vs Vincent Gram
Add an image to this gallery
Retrieved from "https://codegeass.fandom.com/wiki/Vincent_Glinda?oldid=68513"
Community content is available under CC-BY-SA unless otherwise noted.