The Vincent Commander Model (ヴィンセントコマンダーモデルVinsentokomandāmoderu) is an improved version of the seventh generation initial mass production prototype Vincent produced by the Holy Britannian Empire in small numbers for use by field commanders and elite divisions. Designated the RPI-212A, the Vincent Commander Model is put into service by the Britannian Military, and eventually goes on to replace the RPI-209 Gloucester as Britannia's front line high performance unit.

Feedback and data gathered from the Vincent Commander Model is later used to start producing the final mass production model of the Vincent series, the RPI-212B Vincent Ward.

The RPI-212A Vincent Commander Model was designed with the intention of being a mass production model of the original Vincent unit, therefore the A-type is greatly refined from its predecessor whilst still able to maintain the initial success and high performance that the original held during its time under Britannian operation. Almost all aspects and systems of the original unit were greatly improved, featuring enhanced Avionics (which covers a wide variety of systems including communications, navigation, the display and management of multiple systems, and the hundreds of other systems fitted to the unit which allow individual functions to be performed) and housing better shielding against ECM and Gefjun Disturbers, the same technology which is able to disable Knightmare Frames such as the Lancelot, a Knightmare to which the Vincent series draws great inspiration from. Otherwise, the Vincent Commander Model is almost identical to the test-bed unit, the only difference being that it was greatly refined in every area to allow it to be deployed into active military service.

Appearance wise, the Vincent Commander Model is exactly like the original Vincent in its frame and armor design. Standard units used by the army sport a silver main body with dark purple trim colors, although some special groups are shown to have different colors on their Vincent Commander Model units, such as the Valkyrie Squadron which have light pink and magenta colors, and the Emperor's Royal Guard which are seen in green and golden colors.

As for equipment and armament, the RPI-212A houses many of the same weapons and features that its predecessor had. The Vincent Commander Model, like the original, has two Factsphere Sensors which are mounted within its shoulders. It is fitted with Slash Harkens, which are mounted onto both of the hips. Returning from the original unit are its fixed Maser Vibration Swords (MVS) that are designed like spears instead of traditional long swords, and both can be attached at the hilts to form a double-bladed MVS lance sword. The "Needle Blazer" armament also sees a return on the Commander Model. This fixed device is located in both of its elbows and was developed from same technology which powered the Lancelot's "Blaze Luminous" shields. It works by emitting a short-range blast of highly focused energy that can penetrate through a Knightmare's armor with devastating effect, so powerful in fact, it can often pierce right through, destroying the Frame and killing the pilot instantly. Like the original Vincent, the Vincent Commander Model is also equipped with a second set of Landspinners which are mounted into its shoulders, as well as having the two standard issue Landspinners located on the feet, which have also had their mud/dirt guards removed so the Frame can now instantly switch their position from forward to backwards facing. Though an odd feature at first glance, the addition of these extra shoulder Landspinners ultimately gives the Vincent Commander much more mobility, as it is able to achieve far greater evasive maneuvers than what other Knightmares would be capable of using only two Landspinners. The Vincent Commander Model has also been shown to wield an Assault Rifle on occasion, though it is just the same weapon that has been used by previous generations of Knightmare Frames. Although, unlike the original, The Vincent Commander Model has been developed with the intention of being fitted with an optional Float Unit, thus consequentially changing the machine's designation to RPI-212AFA Vincent Commander Model Air.

The Vincent Commander Model was the production version of the prototype Vincent produced in small numbers, exclusively for the use of field commanders and skilled pilots. The first unit of its kind was deployed by the Britannian Military in .a.t.b 2018 during the Battle over the Pacific (in which Lelouch Vi Britannia and the Black Knights attempted to kidnap Area 11's newly appointed Viceroy, Nunnally vi Britannia) leading the reinforcements that were dispatched from the Avalon, and was piloted by Gilbert G.P. Guilford. Although the Vincent Commander Model gains the initial advantage in the battle due to it being equipped with a Float Unit which provided it with air combat capabilities, something that the Black Knight ground based Knightmares were not capable of, the unit was ultimately destroyed by Kallen Kōzuki after taking a blast from the Guren Flight-Enabled Version's Fukushahadō arm. However, Guilford is given a replacement Vincent Commander Model which he pilots in later episodes of the series.

The four members of the Valkyrie Squadron lead by the Knight of Ten, Luciano Bradley, including Marika Soresi and Liliana Vergamon, pilot Vincent Commander Models in light pink and magenta colors that are equipped with Float Units. However, all four of these units were single-handedly destroyed by the Guren S.E.I.T.E.N. Eight Elements during the Second Battle for Tokyo. Knight of Twelve, Monica Krushevsky, is shown to be in command of Emperor Charles zi Britannia's personal Royal Guard who pilot green and golden-colored Vincent Commander Models, a variant known as the Vincent 4, during Lelouch's attack on Kamine Island which were deployed from their flagship, the Great Britannia, to eliminate the enemy forces. Needless to say, these units were unfortunately destroyed in a surprise attack by flight-enabled Sutherlands whose pilots were under the influence of Lelouch's Geass.

During Emperor Lelouch's reign, the Vincent Commander Model is shown to be in full use by the Britannian Army as the replacement of the outdated fifth-generation Gloucester, and is seen leading the mass-produced Vincent Wards and other Britannian forces into battle. It can be seen on a number of occasions in the final battle of the series leading Lelouch's forces during the Battle of Mt. Fuji, one example being a Commander Model, along with a squad of Vincent Wards, attempting to defuse a fired F.L.E.I.J.A. using their MVSs, but failing to do so. Prior to receiving the Lancelot Albion, Knight of Zero Suzaku Kururugi pilots a Vincent Commander Model in service of the new Britannian Emperor. 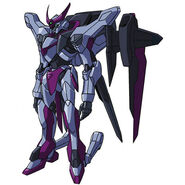 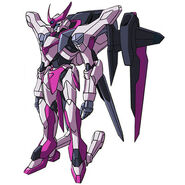 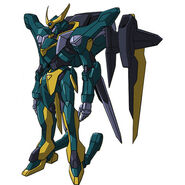 Close up view of the standard Vincent Commander Model

Vincent Commander Model (centre) alongside other Vincent Ward units during the Battle of Mt. Fuji

Valkyrie Squadron Vincent Commander Model units alongside Knights of the Round