The 'Vincent' (ヴィンセント Vinsento) is a seventh generation pre-production prototype model of Knightmare Frame. Based on feedback from the Lancelot and Lancelot Club, the RPI-212 Vincent is introduced a year after the Black Knights' attempted invasion of Tokyo. Although it was initially developed and used by the Britannian Military, it ultimately ends up in the hands of the Order of the Black Knights, and its primary pilot is Rolo Lamperouge.

The RPI-212 Vincent was designed with the intention of being the mass production model inspired by the Lancelot. In fact, most of the data and research that went into its development was gathered from the Lancelot's combat history. Even though it is derived from the Lancelot, its actual design still differs greatly from its predecessor, and while some key elements of the Lancelot were lost (such as the VARIS Rifle and Blaze Luminous Shielding Systems), the goal was to ultimately make the unit more economical for production, while still maintaining an excellent level of performance and efficiency.

The Vincent, like the Lancelot, has two Factsphere Sensors. However, the Vincent's sensors are mounted within its shoulders instead of its chest like the Lancelot's. It also is equipped with Slash Harkens, although there are only two, which are mounted on both of the hips. Much like the sister Lancelot Club unit, its fixed Maser Vibration Swords (MVS) are shaped like spears instead of traditional long swords, and both can be attached at the hilts to form a double-bladed MVS lance. The Vincent also incorporated a type of armament called the "Needle Blazer." This fixed device is located in both of its elbows, and was developed from the same technology which powered the Lancelot's "Blaze Luminous" shields. it works by emitting a short-range blast of highly focused energy that can penetrate through a Knightmare's armor with devastating effect. In fact, it can often pierce right through, destroying the Frame and killing the pilot instantly. The Vincent is also equipped with a second set of Landspinners which are mounted in its shoulders, as well as having the two standard issue Landspinners located on the feet, which have also had their mud/dirt guards removed so the Frame can now instantly switch their position from forward to backwards facing. Though an odd feature at first glance, the addition of these extra Landspinners ultimately gives the Vincent much more mobility, as it is able to achieve far greater evasive maneuvers than what other Knightmares would be capable of using only two Landspinners. During its time under the use of the Black Knights, the trial model of Vincent was fitted with their own flight technology, the Air Glide System, and given a 2-barrel hand gun similar to that found on the Akatsuki.

Appearance wise, the initial trial model of Vincent does not have a set color scheme yet, and is only seen primarily in gold with red secondary trim (some parts such as the legs remain unfinished in a dull grey color, though later models addressed this). Its body shape and armor design are for the most part completely new; however, one can see that there is clear inspiration of the Lancelot in overall its appearance. After the prototype Vincent's initial success during deployment and despite its capture by the Black Knights, a more mass-produced and significantly refined variant known as the Vincent Commander Model is then fielded by the Britannian Armed Forces as an elite Knightmare Frame for skilled field commanders and special units.

The Vincent pre-production model was first fielded by the Holy Britannian Empire sometime in a.t.b. 2018. It was loaned to the Office of Secret Intelligence and was piloted by one of its top assassins, Rolo Lamperouge, where the Vincent is first seen in action during the siege of Babel Tower, as it engaged and outmatched the Black Knights Knightmare units. The Vincent was then given to the Britannian Military to be used during the execution of the remaining Black Knight leaders. The original intended pilot was to be Lord Kimmel. However, Rolo assassinated him, taking his place during the execution. Rolo would then use the Vincent to block an incoming attack from Guilford's Gloucester that was intended for Zero.

Rolo would eventually end up taking the prototype unit with him when he defected to the Black Knights' side. During this time, the Vincent was equipped with the Black Knight's Air Glide System in preparation for the Assault on the Geass Order. This unit served as Rolo's personal Knightmare throughout much of the second season, until it was heavily damaged in a battle against the Siegfried, piloted by V.V., when Lelouch vi Britannia (masked as Zero) tried to destroy the Geass Order once and for all. Rolo ejected the unit's legs and left arm components in an attempt to grapple onto the Siegfried, but this plan never came to pass due to Cornelia's interference.

Vincent with its swords ready. 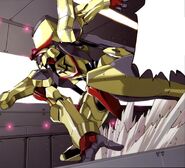 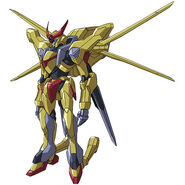 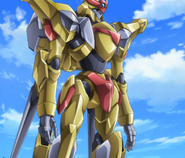 One of the hip-mounted Slash Harkens being activated

The Vincent using its Needle Blazer against a Burai 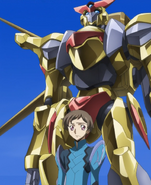 Rolo with the Vincent fitted with Air Glide System

Rolo and his Vincent 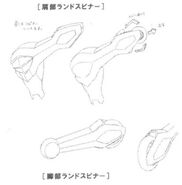