Villetta Nu (ヴィレッタ ヌゥ, Vuiretta Nuu), 26 years old (27 at R2), is an elite Knightmare Frame pilot and subordinate of Jeremiah Gottwald. She becomes a baroness in the second season and is initially blackmailed into joining the Black Knights. She is voiced by Akeno Watanabe (Japanese) and Megan Hollingshead (English).

Villetta is a tall young woman with bluish-gray hair, yellow eyes, and dark skin. She is usually seen with a small part of her hair to the right of her face and the rest tied up with golden ties and wrapped in purple fabric. Her usual clothing is a white and red shirt covered by a long, purple vest-like coat. She also wears a black belt, black skirt, black thigh-high stockings, and long purple gloves.

When she lost her memory and became Chigusa, she wore her hair straight down and sported a long off-shoulder sweater-dress.

And when working as the Ashford gym teacher, she wore her hair in the fashion and wore a red crop-top with a yellow stripe. She also wore a red skirt that reached up to her crop-top and could detach to reveal red shorts. Along with the top, skirt, and shorts, she wore a small white and blue coat, black thigh-high stockings, and white heeled boots.

Like many Brittanians, Villetta was loyal to the empire and looked down on those from Areas they conquered. However, after her memory loss, Villetta displayed a much kinder personality as she did not retain her racism. During her time as "Chigusa", she developed a deep and genuine love for her rescuer and caretaker Ohgi. Unfortunately, she was attacked by racist Elevens and her memory came back.

After this, Villetta fought against her love for Ohgi, believing it was tainting. She attempted to kill him to rid herself of these feelings, but he survived. Ultimately, Villetta gave in to her love and married Ohgi.

As she first appears, she is more collected than Jeremiah in battle. She is not of noble blood, but she supports Jeremiah and the Purist Faction in the hopes that it would earn her a real title of nobility. As a Knightmare Frame pilot, she holds the rank of Knight, but this title of nobility only lasts for a single generation. Jeremiah had hoped to bestow her the title of Baroness so that her descendants would retain her noble rank. She later gains that coveted title of Baroness following the Black Rebellion.

Villetta makes her first appearance in the first episode of the series when she along with Jeremiah Gottwald enter Knightmare Frames after Prince Clovis la Britannia commands all Knightmare pilots to recover the capsule that was stolen by the terrorists.

Shortly after Lelouch Lamperouge gains the power of Geass , he is confronted by Villetta. Lelouch tricks her into leaving her Knightmare, then uses his Geass to have her turn it over to him, leaving Villetta standing in an empty warehouse confused as to why her Knightmare is gone.

Villetta and the other purebloods within the Britannian Army frame Suzaku for Clovis' death, planning to use him as an excuse to rid the army of Honorary Britannians. Zero reveals himself publicly, and declares it was he who killed Clovis. As a result of Zero using his Geass on Jeremiah Gottwald to force him to assist in Suzaku's rescue, she along with the other purebloods are prevented by Jeremiah to stop their escape.

After Jeremiah is disgraced for helping Zero escape with Suzaku Kururugi, having likewise been compelled by Lelouch's Geass to do so, Villetta remains loyal to him, since she too has experienced similar memory loss after apparent strange behaviour. After Jeremiah's apparent death, she resolves not to die in disgrace as he did. She begins investigating Zero's connection to Lelouch, basing her search on the blurry image of Lelouch she saw in her Knightmare shortly before exiting it. She narrows her search down to Lelouch, and enlists the aid of Shirley Fenette to discover the truth. While Villetta follows her, Shirley discovers Lelouch's secret identity. Villetta nearly succeeds in arresting him, but Shirley shoots her in order to protect Lelouch.

Villetta is saved by Kaname Ohgi, who doesn't realize who she is. Having developed amnesia from the trauma of being shot, Ohgi names her Chigusa (チグサ) and decides to take care of her, since he is unwilling to kill her in cold blood and turning her into the police would draw unwanted attention toward the Black Knights. She falls in love with him as a result, even going as far as telling him that she didn't mind him being an Eleven.

In the season finale, Villetta regains her memories when she is attacked by a group of rioting Elevens. She is disgusted at the fact that she was romantically involved with an Eleven. She makes her way to Ashford Academy, where the Black Knights have made their headquarters. Ohgi takes her to speak privately, only to be surprised when she shoots him in the stomach. She escapes the compound in a Knightmare Frame.

In the intermediate year, Villetta has been granted the title of Baroness for discovering Zero's identity and is working with the Office of Secret Intelligence. She is employed at Ashford Academy as the gym teacher, placed there to monitor Lelouch for any signs of contact with C.C. She is quite popular within the school, and is also the head of the swimming club, of which Shirley Fenette is a member. She doesn't seem to harbor any ill-will toward Shirley, actually using the fact that Shirley shot her as an example of how much she likes Lelouch. Along with Rolo Lamperouge, she is the only one aware of Lelouch's suppressed Geass ability. After regaining his memories, Lelouch uses Villetta's previous relationship with Ohgi to blackmail her into keeping quiet.

Despite her actions in the finale of the first season, Villetta still seems to care for Ohgi, suggesting that her teaching position is motivated by Ohgi's comment about having been a teacher before the war. When Ohgi is freed by Lelouch in the fourth episode, she breathes a sigh of relief before quickly regaining her normal composure. In the fifth episode, during the Ashford Academy's school festival, Villetta is forced to pose in a provocative swimsuit along with some of the other Swimming Club members as a means of advertisement. Villetta is enraged and becomes pissed at having to be an undercover teacher; however, she suddenly has a flashback of Ohgi telling her he used to be a teacher and gets sad. In the eighth episode, Viletta is constantly looking for Ohgi at the opening ceremony for the Special Administrative Zone of Japan, Lelouch having told her he would attend. When one of the Zero-dressed participants attempts to shoot her, Ohgi, also disguised as Zero, prevents him from doing so. She immediately suspects his identity, but he denies it and bids her farewell.

Despite being blackmailed, she passes up a chance to get rid of Lelouch by knowingly maneuvering Jeremiah into his trap. When Zero leaves to attack the Geass Directorate, Villetta sneaks away to the Chinese Federation to confront Ohgi, intending to kill him to eliminate her links to the Elevens. She hesitates when Ohgi admits his love for her. However, before she can reconcile with him, they are interrupted by Sayoko under the orders of Diethard to monitor Ohgi after which, she engages in combat with Sayoko. When Ohgi is stabbed by Sayoko's kunai and falls off a cliff in an attempt to protect her, she leaps down after him. She is recovered and held hostage by Diethard to ensure Ohgi's loyalty. She is set free during Cornelia's escape and apparently leads Ohgi to believe Zero cannot be trusted. She remains with the Black Knights following a suggestion by Cornelia that nobility is not all that matters.

It is revealed that she is pregnant with Ohgi's child and she remains on Penglai Island when the Black Knights depart to battle Lelouch. During the execution of the Black Knights and the UFN representatives, she was about to try and attack Lelouch only to be stopped by Cornelia. When Lelouch was assassinated by Suzaku, disguised as Zero, she and the other black knights freed the prisoners. At the end of the series, she is married to Ohgi having abandoned her military life in Britannia.

Villetta and Jeremiah both served in the Purist Faction of Britannia.

Villetta holds great respect for the Second Princess of Britannia.

Villeta first met Ohgi after suffering amnesia and have feelings for him. However, her relationship with him was strained due to him being a member of the Black knights and shot him after regaining her memories. She still harbors feelings for him moving into season 2. These feelings soon blossom into something beautiful between both of their factions.

In Code Geass: Lost Colors, the video game for the PlayStation 2 and PlayStation Portable, there are a few endings and clips of Villetta Nu that involve the main character, Rai.

In the manga adaptation of the series, Villetta doesn't appear until the second season storyline. Instead of Villetta getting shot, Shirley shoots Jeremiah. Also, since Knightmares didn't exist, Villetta was given a different Geass command--looking over Lelouch and Rolo's irregular doings. Also, Villetta is the one possessed by Marianne vi Britannia instead of Anya Alstreim, as revealed in the final volume of the manga. Unlike the anime, since she did not appear in the first manga but came in the second storyline, she does not have a relationship with Ohgi. However, she is shown together on panel with Ohgi during their last scene in the manga, where they teach at Ashford Academy. 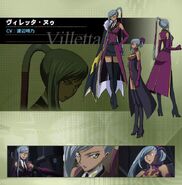 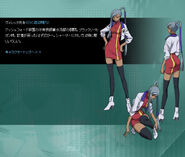 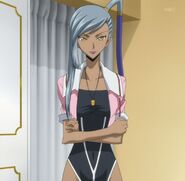 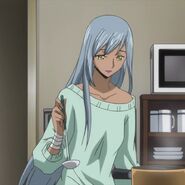 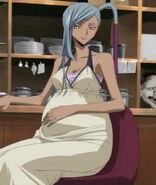