Victoria of the Void is a Britannian knight and member of the Knights of the Round during the 1800s, having achieved the position of Knight of Eight. She fights with a whip sword and is powerful enough to defeat a Knightmare on her own.

Victoria is a young teenage girl, with a slender figure. She has long blond hair that she keeps tied into twintails. When on duty, she wears a variation of Gigant Armor that is associated with the Knights of the Round of her time period. She wore a helmet, but it was destroyed during her first duel with Renya.

Victoria is a proud Britannian and is a ruthless, diligent warrior in combat. She deeply regrets not being strong enough to prevent the destabilization of her country. Her dream is to see the Knights of the Round and Britannia reunified under one sovereign and as such, Victoria is extremely loyal to Lorenzo il Soresi's goal of establishing order across the empire. She is aware of C.C and Geass, and while looking down on its existence, does not fault Lorenzo for having one. She is devastated when Shiori casts her Geass on Lorenzo, switiching the priorities of his heart from "ambition for domination" to "loyalty to the Royal Family." She believes that the fate of Britannia must be decided by humans, not "aliens."

Not much is known about Victoria's early life. She was born during the 19th Century and by the year 1860, became a Knight of the Round, serving as Knight of Eight. At this time, the Holy Britannian Empire was enduring a succession crisis after the death of Emperor Aurelian, murder of First Prince Basilio, and disappearance of Knight of One Christoph Chamberlain. Britannia was divided into two disputing factions, the "Legitimate" Faction and the "Purist" Faction. Lead by the House of El and supported by former Consul Chesterton and the Order of the Knights of Merlin, the Legitimate Faction backed Basilio's son as the next emperor, but the boy was only five years old. The Purist Faction, led by the charismatic Britannian noble Lorenzo il Soresi, supported the older Prince Richard and wanted to see Britannina united under a single strong leader. As the later was in line with Victoria's way of thinking, she chose to back Lorenzo along with the Knight of Thirteen, Barbaros.

In 1860, Lorenzo dispatched Victoria and Barbaros to Japan with several ships to retrieve Claire li Britannia and Alto Weinberg and to kill anyone else following them. She separates Renya from Alto and almost defeats him effortlessly with her whip sword until his cursed arm evolves, allowing Renya to drain the heat from her body. She retreats and reports to Lorenzo via carrier pigeon that Barbaros was defeated before returning to Britannia. She is reassigned to retrieve the Holy Stone from Renya before Dash can, but observing that he and his group were approaching the Island of Despair, choose to leave instead, believing the Chamberlain brothers would kill them.

Some time later, Victoria is present during a meeting between Lorenzo and Claire. Lorenzo reveals that while the Purist Faction has officially backed Prince Richard, Lorenzo finds him unsuitable for the throne as Richard only has an interest in music and painting rather than politics. Believing the country can only be united with himself as Britannia's heart true heart of Britannia, he expresses his desire for Claire to renounce her claim and will allow her and her friends a life in confinement. A fight breaks out and Victoria effortlessly stops Alto from attacking Lorenzio, mocking him for meing too emotional. She appears to fail blocking an attack from Futaba Sumeragi from behind, although this turns out to be an illusion caused by Lorenzo's Geass. Realizing negotiations are pointless, Victoria throws small pieces of Sakuradite ore which explode, destroying the room and covering their escape.

As they leave, Lorenzo tells Victoria to mobilize the army the next morning and apologizes for having her waste time investigating the Holy Stone. The two are intercepted by C.C and Shiori, the former mocking Lorenzo that even a great man like him could succumb to repeatedly using Geass to get his way. The delay is long enough for Renya and the others, as well as Dash and his knightmares. Victoria moves to attack but is disabled by Water Boy. Lorenzo attempts to take everyone over with his Geass, but is taken by surprise by Shiori, who Geass switches his priorties from dominating for myself to serving with loyalty.  While Dash's knightmares and Renya fight, Victoria attempts to assassinate Shiori, but is repelled by Renya. Alto insults her for resorting to a sneak attack as a Round, but victoria tells him to be silent, crying that her dream has been destroyed by the power of Geass. She despairs what a powerful curse Geass is as Lorenzo tries to convince her to follow Claire and shouts at everyone to wonder if they're even human and declares Britannia's fate should be decided by humans, not aliens. Claire tells Victoria that anyone who is capable of feeling love is a human. Dismissing her words as vain nonsense, Victoria tries one more time to kill Shiori before being disabled by Alto.

While Alto reassures Lorenzo that Victoria is just unconscious, she does not make an appearance at the ceremony celebrating a reunited Britannia and her fate remains unknown. 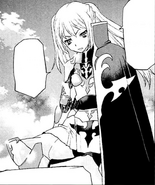 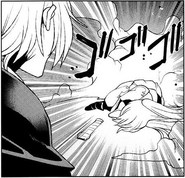 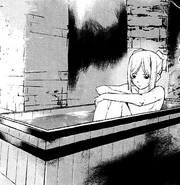 Victoria in her bath.
Add an image to this gallery

Retrieved from "https://codegeass.fandom.com/wiki/Victoria?oldid=75459"
Community content is available under CC-BY-SA unless otherwise noted.