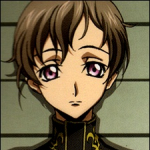 Hi, welcome to Code Geass Wiki! Thanks for your edit to the Thread:11267#7|Revenge of Lelouch page, and thanks for joining our community! There's a lot to do around here, so I hope you'll stay with us and make many more improvements.

Recent changes is a great first stop, because you can see what pages other people have been editing, and where you can help.

Questions? You can ask on the "discussion" page associated with each article, or post a message on my talk page!

Need help? You can find it right here! You can also find a full list of help pages here.

Don't know what to do? The Community Portal has an outline of the site, and has links to pages to get you started!

Here are some more pages you might find useful:

Sign your name in discussions by typing ~~~~, which automatically adds your signature and the date, so we know who's talking!

Well, the name of the DS game is the same name as the anime itself - Code Geass: Lelouch of the Rebellion

I have no objections to the Episode Summary Project and I think the page is fine. Could you link the user talks on my talk page that haven't received an automated welcome message. Thanks. Lelouch Di Britannia Talk Page  14:40, June 2, 2014 (UTC)

Okay as for Lelouch's similarities with Kamui and Fuuma, I will split them into sections. Oh and if you haven't seen X/1999, you should because Code Geass shares some similarities and themes with the show/manga. Kamui and Fuuma also appears in Tsubasa Reservoir Chronicles in Clamp as well.

I know that its too much but this is all I can put so far. I'll keep throwing more updates asap.

Haha no sweat. Ever since I knew X in an anime magazine a long time ago, I forgot it but after seeing Lelouch in Code Geass, I was like THIS SERIES AND THE GUY REMINDS ME FROM X!  :D. Hopefully you get this far and don't forget to read the manga as well! Of course I've been spending research on X since I liked the story very much making it my favorite CLAMP series.

Lelouch's character is based on Kamui from Clamp Series X-1999 whom Code Geass is said to be it's source for the story and characters. Also Lelouch resembles Kamui in terms of character design. Lelouch and Kamui have whats in common: both are gifted supernatural users who holds the fate of civilization in their hands by leading a war for peace. But at the same time they must suffer hardships and deaths especially when they protect their loved ones.

Other than Kamui from X, Lelouch also have common with Fuuma Monou as well. Lelouch and Fuuma are big loving brothers to their little sisters and are best friends with their childhood friends. Both realize that they cannot escape their fate later in the series. They may have different actions but their villainistic traits are similar since they both end up becoming enemies to their childhood friend and other friends along with making sacrificial decisions for the sake of the world at hand.

This is the best I can do but if you can make some modifications, feel free because I'm willing to get help to make both trivias better. If nobody in this website community has never seen X or Tsubasa Tokyo Revelations, recommend it because not everybody's seen it and I am pretty sure it will catch their interest!

Can you add Rolo Vi Britannia as his clone and Clara as his temporary sister?

Thank you and I appreciate it! I've been wanting to contribute to Lelouch's page for a long time and now it was a dream come true! No worries there is no way. The only time I'll ever add my own stuff before is to discuss in it's talk page so that people can agree.

Thanks for the temporay lift of Lelouch vi Britannia page. I've fixed and added more details for the relationship section. Can't find a suitable picture for Suzaku, Nunnally and Euphie though.

Appreciate for anything you can give.

Thank you for the offerEdit

I added images for Byakuen and Agravain, and the Alexander variation Florence from Oz the Reflection's Hobby Japan site. But there is a lot more info on it that I can't get with my very limited knowledge of japanese. But there is still a lot more info that could use a translator, especially for the Knightmare variations. If you or you know anyone that might be able, keep it in mind for future wiki development.BahamutX978 (talk) 17:28, July 22, 2014 (UTC)

Hey, mind helping me out with making a new character page for one I just learned about? Its from the Renya spinoof, and its an immortal named U.U. who gave Dash his Geass. I figured it seemed like something that should be on here. I'll add the images necessary too.

Hi J two, not all newly created users shall have a userpage created by the automated MediaWiki:Welcome-user-page. This mediawiki only apply to users who have made an edit to this wiki. Wikia has not made any mediawiki or extension that could help fix this so we'll just have to leave it be. Lelouch Di Britannia Talk Page  05:41, July 29, 2014 (UTC)

Hello, if you don't mind, can you lower the security for the Holy Britannian Empire Page just to add in stuff regarding Nightmare Of Nunnally, Oz The Reflection, and Akito The Exiled? Oh and I just created a Euro Britannian Page so that you and the others can contribute it.

Merging Lelouch and Julius' page into one as a considerationEdit

Hello, despite the OVA 3 release date waiting, do you not mind if Lelouch and Julius' page be merged into one as for Lelouch? I just have this complete confidence from the trailer that Julius is Lelouch no doubt. Think about it, more evidence from the trailer confirms it due to Charles' flashback and Lelouch's chess habit.

I suggest that Charles and Schneizel to be added since they are Lelouch's greatest enemies. Shin Hyuga Shing is a nice addition since he cooperated with Lelouch during the E.U. campaign (I just have this confidence Julius is Lelouch and that I have already jumped to conclusion). As for Nunnally, add that Nunnally never hated him despite Lelouch's intention since as hinted by Charles, Lelouch and Nunnally's chemistry cannot be broken unlike that of Suzaku's.

Hi. I was wondering if the episode summary project is still going on? I've found the plot sections of the first few episodes extremely useful; I'm actually blind but was able to watch CG with a sighted friend, and now I'm showing it to someone else who's blind. I've been using the plot sections to fill in the visual details I don't remember from first watching it. However I noticed that the last description is only at turn 8, and it seems less detailed than the previous seven. Are there any plans for continuing filling in the plot sections? I'm really impressed with the level of detail put in the ones that are here; they're far superior to any other summaries I've found elsewhere. Really hope these are still being updated. Thanks. --Bjaxstriker (talk) 05:36, June 3, 2015 (UTC)

Hello, I saw you were in charge of the Episode Summary Unit. I am interested in helping out, so I was wondering if there are any episode summaries in more desperate need of revision than others. Thank you.

Hii J two i'm LuvOf99Th♥Talk a Wiki Contributor, How are you? i hope you are good, Well i was just wanted to ask that are you still Active at this wiki? OneThing more if u r really Active soo can i discuss somethings about CodeGeass, with U? (DontWorry, i'll not annoy u) Pls reply me at my TalkPage OR Here will be Ok too, LuvOf99Th Talk♥CO♥ 02:03, April 29, 2020 (UTC)

Retrieved from "https://codegeass.fandom.com/wiki/User_talk:J_two?oldid=77112"
Community content is available under CC-BY-SA unless otherwise noted.