Start a Wiki
Toto Thompson (トトトンプソン, Tototonpuson) was a gentle girl who served the Zevon family as a maid and later served within the Glinda Knights as an operator of the floating airship “Grandberry”.

Toto Thompson was a gentle girl. She acknowledged Oldrin as the true successor of the Zevon family. Toto was very loyal to Oldrin to the extent of entering the military along with her.

It is unknown when was Toto received her Geass and began the affiliation with Wizard.

She worked within the Glinda Knights as an operator of the floating airship "Grandberry". In the end of Oz, Toto casted a geass on both of the twins to alter their memories and died after being mortally wounded by V.V.

Toto's Geass gives her the ability to erase memories. It appears to require direct eye contact to work. 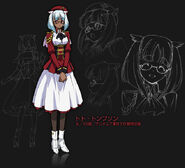 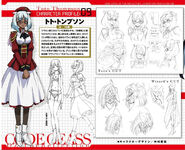 Add an image to this gallery
Retrieved from "https://codegeass.fandom.com/wiki/Toto_Thompson?oldid=73925"
Community content is available under CC-BY-SA unless otherwise noted.