Start a Wiki
Swaile Qujappat (スウェイル・クジャパット, Suwairu Kujapatto) is a character that appears in Code Geass: Lelouch of the Re;surrection. Leads a team of assassins. A cruel person who used to be with the Geass Cult.

Qujappat's Geass is the ability to reverse a person's perception of who their foes and allies are. This causes a person to see their allies as their enemies, such as causing Kallen to see her friends as multiple Qujappat, and vice versa. While the effect can be problematic, if the target has prior knowledge of the effect then they can act accordingly, such as with Sayoko The effect appears to require constant contentration of the Geass user, though, as it wore off when he was knocked unconscious. 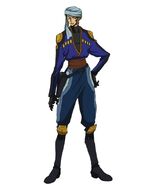 Add an image to this gallery
Retrieved from "https://codegeass.fandom.com/wiki/Swaile_Qujappat?oldid=78329"
Community content is available under CC-BY-SA unless otherwise noted.