Start a Wiki
The Sutherland Pluton Custom is a variant of the Sutherland modified for the use of the organization Pluton.

The RPI-13/PC Sutherland Pluton is a variant of the Sutherland that appears in the manga and photo story, Code Geass: Oz the Reflection. It is used exclusively by the Britannian special forces group, “Pluton”, which undertakes dirty jobs for the royal family. Since its interior frame and OS has been customized, it is more highly efficient than the regular Sutherland, although it possesses the same armaments. To distinguish it from regular Sutherlands, it has completely black armor along with purple shoulder armor and face-plate.

Sutherland Pluton seems to serve as the main Knightmare Frame used by Pluton. One of them was piloted by Pluton member Serverous, and was incapacitated by Orpheus in a custom Glasgow at a ruined village in southern Hungary. Later, several units accompanied Carine ne Britannia's Knight, Dasko la Clermont, on a mission to attack an anti-Britannian organization in Southeast Asia, but were stopped and defeated by Orpheus. 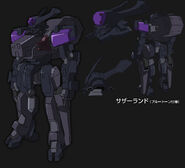 Add an image to this gallery
Retrieved from "https://codegeass.fandom.com/wiki/Sutherland_Pluton_Custom?oldid=69244"
Community content is available under CC-BY-SA unless otherwise noted.