The Sutherland Ikaros (サザーランド・イカロス, Sazārando Ikarosu) is a prototype Knight Giga Fortress designed and piloted by Wilbur Millville, the former Weapons Development Head of Steiner Konzern and the leader of the Britannian anti-imperial terrorist group Wings of Talleyrand. It was created using some of the technologies that were used in the development of the Bradford.

The Sutherland Ikaros was designed as a positional bomber unit, by laying siege to bases and cities from the sky above. It uses a modified Sutherland W as its core, which bears the flight control system. The rest of the unit is composed of a large outer frame that carries the electric-powered Plasma Propulsion Motor that serves as its flight system, the same flight engine used by the Bradford. Its armaments consist of two Megiddo Harkens, a series of missile pods, two Coil Guns housed inside the unfolding wings, and a series of bomb containers that are stored on the underside of the Sutherland Ikaros that can be dropped on enemies below.

The only Sutherland Ikaros prototype was deployed by the Wings of Talleyrand during their terrorist attack on the capital Pendragon from the coast in 2017 a.t.b. However, the attack was stopped by the Britannian Military spearheaded by the Knightmare forces of the Glinda Knights, and the Sutherland Ikaros ended up destroyed along with its pilot Wilbur Milville in the higher atmosphere at the end of a battle with the Bradford and Lancelot Grail. 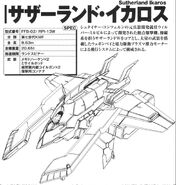 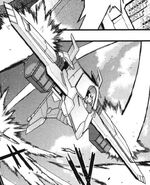 Sutherland Ikaros with its Harkens and wings folded 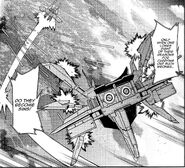 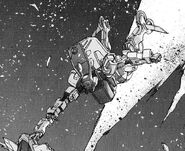 Sutherland W (without Knight Giga Fortress outer frame)
Add an image to this gallery
Retrieved from "https://codegeass.fandom.com/wiki/Sutherland_Ikaros?oldid=73915"
Community content is available under CC-BY-SA unless otherwise noted.