The Sutherland Eye (サザーランド・アイ, Sazārando Ai) is an experimental Knightmare Frame that is assigned to the Glinda Knights along with the Zetland. Its pilot is Sokkia Sherpa.

The Sutherland Eye is Sutherland whose electronic equipment has been enhanced in order to search for enemies and to improve its command capabilities. By combining its Factsphere, which can independently detect sound waves and electromagnetic waves over a wide bandwidth, with its advanced calculation-and-processing system, it can grasp the battlefield situation in three dimensions. It is equipped with the experimental VARIS Rifle, with the purpose of eventually putting it into mass-production in mind, and a Schrötter Steel knife attached to its left wrist. However, since the traditional Energy Filler does not possess enough energy for the VARIS by itself, it has an Yggdrasil Drive on its exterior, in the form of a spherical attachment to its left shoulder.

One of these unit has been given to the glinda knights and is piloted by Sokkia Sherpa due to her high tactical and information analysis abilities.

In Code Geass: Lelouch of the Re;surrection, some are seen among the forces who have kidnaped Zero ( Suzaku ) and Nunnally at the begining of the movie. 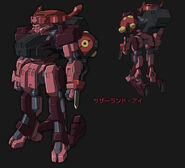 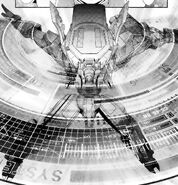 Schrotter Steel Knife sketch
Add an image to this gallery
Retrieved from "https://codegeass.fandom.com/wiki/Sutherland_Eye?oldid=74330"
Community content is available under CC-BY-SA unless otherwise noted.