The heavily modified Sutherlands created by Lloyd Asplund and code-named "Sutherland Club". During the early development stages of the game Code Geass: Lelouch of the Rebellion - Lost Colors, Rai was supposed to pilot one of them if he were to join the Britannian Military. However, the idea was rejected and the Sutherland Club lost its role in favor to the Lancelot Club. 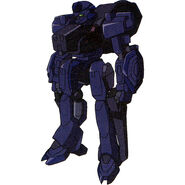 Sutherland Club Unit 2
Add an image to this gallery
Retrieved from "https://codegeass.fandom.com/wiki/Sutherland_Club?oldid=65979"
Community content is available under CC-BY-SA unless otherwise noted.