Start a Wiki
The Sutherland (サザーランド, Sazārando) is a fifth generation Knightmare Frame which was developed and deployed some time after the conquest of Japan/Area 11. Designated as the "RPI-13 Sutherland", it is in many ways an effective refinement of its predecessor, the RPI-11 Glasgow. The Sutherland is shown to be the mainline mass production Knightmare of Britannia's military forces throughout the series, and is seen during most, if not all major battles.

Later in the series, a large majority of Sutherlands are replaced by the higher performance Gloucester, and even further by the mass production 7th generation Knightmare Frame, Vincent Ward. However, there are still a significant number of Sutherlands which are shown to remain in active service with the military, most likely due to its reliable and effective design.

Being one of the first in the 5th generation of Knightmares, the Sutherland features a completely redesigned, simplified cockpit system with improved life support functions and better user interface controls. As well as general performance upgrades, the Landspinner propulsion system was greatly enhanced, refined for higher speeds and better stability when in combat. Most of the Frames body was also compeletly re-designed, such as adding more additional armor plates (known specifically as "L307 Reinforced Tungsten metal" plating) reshaped in order to better increase the crew and units protection. The head was also simplified, incorporating a unique some what humannoid appearance with built in eyes, although still retaining the same Factsphere Sensor system as seen on the Glasgow. Storage compartments were also added in the shape of hip guards, which are seen holding small equipment like Chaos Mines. Furthermore, the Sutherland's has a unique, though unconventional, blue/purple main body colour with a grey secondary trim. This shade of military blue/purple, would become adapted with the Empires future mass production models, such as the RPI-212B Vincent Ward.

Furthermore, the Sutherlands introduction brought in a number of new weapons and technologies, such as cockpit mounted Stattel-Waffen Missile Launchers, Jousting Lances, Stun Tonfas (an upgraded version of the already existing Tonfa weapon but with an added Stun Gun which electrifies the metal baton) and the aforementioned Chaos Mines. Most army Sutherland units are equipped with either an Assault Rifle or Giant Cannon rocket launcher, which was also re-designed to be fired more like a traditional bazooka weapon. All of the above-mentioned weapons would see continued use with future developed Knightmare Frames.

Even though some of these improvements were easily passed back to the aging Glasgow in the form of upgrades (such as the development of the Knightpolice for special Britannian police units), the Sutherland eventually replaced it as Britannia's main battle unit. Standard models used by the army are commonly seen in flat blue/purple colors, although some groups who use the Sutherland as their primary unit have decorated them in their groups signature colors, such as the Purist Faction with crimson red markings. In the very first episode of the series, Jeremiah Gottwald remarks that the red Glasgow piloted by Kallen Kōzuki may have been found in a scrap pile and that it is "No match for a Sutherland!" given that the Glasgow was part of the 4th generation and is considered to be vastly outdated. When needed, Sutherlands can be fitted with an optional Float Unit system, consequentially changing the machines designation to the RPI-13 Sutherland Air (サザーランド・エア, Sazārando Ea).

Though it's an advanced and effective design, much of the its predecessors success comes from Britannia's overwhelming numerical and economical superiority to Japan. Further, the Glasgow was designed primarily to combat tanks and other "traditional" ground combat machines; this proves to be a liability, as its own success means that nations such as the Chinese Federation and E.U. began seriously pursuing Knightmare designs of their own. Thus, the Sutherland was created with the possibility of engaging in battles with other Knightmare Frames in mind, although it is shown to be inferior against higher generation Knightmares such as the Guren or Lancelot. Its design was later used as a basis for the newer RPI-209 Gloucester, a higher performance conuterpart with an emphasis on "Anti-Knightmare Frame" combat.

Members of the Purist Faction pilot Purist Sutherland's with distinctive crimson red markings on the shoulder armor, and Factsphere armor plate. The unit at its core appears to be just a standard Sutherland, although member's of the faction are considered to be elite pilots, and are commonly seen utilizing powerful weapons like Stun-Tonfas, Jousting Lances, and even Chaos Mines, therefore making them far more formidable than regular army units. The Purist Sutherland is not seen for most of season 2 but during the attack on the Geass Order, Jeremiah pilots a Purist version of Sutherland equipped with an Air Glide System and arm mounted artillery cannon as its primary weapon, before presumably merging this same Sutherland with a Siegfried in order to form his personal Knight Giga Fortress unit, the Sutherland Sieg.

In a.t.b. 2017, Knightmare developer Lloyd Asplund creates an experimental Knightmare Frame known as the Sutherland Air that incorporates several technologies created for the Lancelot, including a Blaze Luminous particle shielding system and Float Unit. It is distinguished from other Sutherland Air models by its light gray armor with light orange painted parts. Cecile Croomy makes use of this heavily modified Sutherland in a rescue operation during the first Black Rebellion, when the Avalon and its crew help evacuate students from an occupied Ashford Academy.

The Sutherland Sniper is a variant of the Sutherland that appears in the manga and photo story, Code Geass: Oz the Reflection. Its main weapon is a modified rifle that fires a Hadron Cannon, along with a stylized shield in the shape of a Britannian crest. The currently only known unit shown so far is piloted by General Johann Schwarzer of the Glinda Knights.

The exact date of which the Sutherland was first deployed is unknown, though it was sometime after the invasion of Japan in .a.t.b 2010, as by a.t.b 2016-2017 they have completely replaced the aging Glasgow as the frontline Knightmare Frame of the Britannian military. During the first Black Rebellion, Sutherlands are shown to make an appearance in almost every major battle event that takes place, they are usually seen in the background playing a very minor role, and almost always operated by the Britannian military forces. However, in certain isolated incidents, they were piloted by members of anti-Britannian resistance groups, or even the Black Knights, usually via means of theft or defection, and some of these captured units were even repainted or re-designed to separate them from the main Britannian forces (such as the Black Knights who re-painted some units into a dark green colour)

By a.t.b. 2018, many Sutherlands appear to have been replaced by the RPI-209 Gloucester, although at this point the Sutherland is still acting as the primary Britannian mass-production Knightmare, with the Gloucester machines filing a field commanders/elite pilots role. Sutherlands also played a significant part in the war with the E.U, and can be seen fighting alongside Gloucesters in battle during the course of R2. Eventually the production of the Float Unit becomes more common place, and a number of Sutherlands are fitted with this new technology which enables them the ability to fly. This leads to some Sutherlands being adapted into the Air Force to take on escort duty for the larger Airships, replacing the need for traditional fighter jets.

Sometime later in .a.t.b 2018, the need for a newer type of mass-produced Knightmare which can counter enemy machines of the 7th Generation leads to the development of the RPI-212B Vincent Ward. However, despite the fast deployment of this newer generation of mass-production Knightmare, the Sutherland still plays a notable role within the Britannian military, most likely due to its volume in production numbers and overall realible design. During Emperor Lelouch's reign, some Sutherlands, alongside Gloucesters, are shown to be in use as frontline units although their roles and importance is somewhat reduced due to the newer Vincent Ward and Vincent Commander Model making up half of Emperor Lelouch's Knightmare forces.

In Code Geass: Lelouch of the Re;surrection, some are seen among the forces who have kidnaped Zero ( Suzaku ) and Nunnally at the begining of the movie.

The Sutherland is a fifth generation Knightmare Frame, much like the one from the original series, that was developed from the RPI-11 Glasgow with improved mobility, performance, armor, and user interface control systems.

The Sutherlands used by the Knights of St. Raphael are white with blue/purple secondary trim colors, while the Knights of St. Michael are decorated in white and red markings, additionally both Knight Orders have highlighted roman numeral markings on their Sutherlands which translate to the number 42. The Sutherlands used by the mainline Euro Britannia army retain the same original military purple/blue body color scheme as those used by the regular Britannian military but have small red/black checkerboard design on the chest, knee, and ankle armors, as well as a black Factsphere plate. These units also have the Britannian forces crest as well as "EURO" written on both the shoulder armor (This most likely done in order to distinguish between units used by the Homeland and Euro Britannian forces) There is also a second Euro Britannia army Sutherland variant that is decorated in purple/blue body colors, with white striped markings all throughout the body that was seen in the first Akito teaser trailer, however it was cut from the final OVA films release (Although it does make a re-appearance in Oz The Reflection Picture drama during the Euro Britannian invasion of Berlin)

Additionally, Euro Britannia is shown to utilize a number of unmanned Sutherland Drone units which have the rear cockpit completely removed with wiring leading into the head where the Factsphere Sensor is usually housed, and are seen with yellow striped markings, although these drone models were only seen once on board the Ark Airship. The Sutherland's design also acted as the basis of elite Knight Jean Rowe's personal Knightmare Frame, the Gracchus.

In terms of armaments, the Sutherland is shown to use the same weaponry that was seen in the original series, such as Assault Rifles (though with scope attachments instead of Grenade Launchers) Giant Cannons and Jousting Lances. Although, the Knights of St. Michael are shown to wield large deployable Battle Axes on their Sutherlands, which are stored on the left arm, and have access to a deployable ballistic shield which can be used to protect the frame during a coordinated forward advancement. 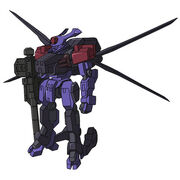 Design showing each part of the Sutherland Knightmare 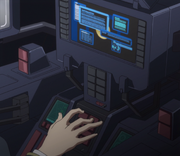 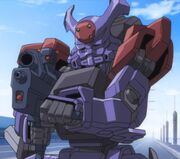 Purist Sutherlands in the Orange Incident

Chaos Mine stored in the Hip guard compartment

Sutherlands and Army units moving out during the Saitama Ghetto campaign

Sutherlands being depolyed via train during the Mount Narita Assault

Sutherlands in combat during the Shinjuku Ghetto skirmish

Sutherlands falling back during the Shinjuku Ghetto skirmish

Sutherlands alongside the newer Vincent Wards

Knightmare Design of the Knights of St. Raphael Sutherland.

Knightmare Design of the Knights of St. Michael Sutherland.

The second variant of a Euro Britannia Army Sutherland 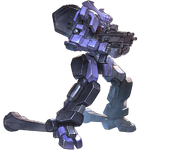 Sutherland in Granblue Fantasy
Add an image to this gallery

Retrieved from "https://codegeass.fandom.com/wiki/Sutherland?oldid=74741"
Community content is available under CC-BY-SA unless otherwise noted.