Start a Wiki
The Student Self-Defense Force of Ashford Academy appears only in the manga adaptation of Code Geass. They appear to be the self-proclaimed protection force of the academy; Rivalz Cardemonde commented that they are a rogue club that only wanted to look cool in front of his classmates.

Apparently, many members of the Self-Defense Force have military backgrounds, which may be a contributing factor to their over-patriotic tendencies, not to mention why they were not disbanded by the school in the first place. They also act as the school's disciplinary force, enforcing the school's laws by violent means; Rivalz also commented that they ruined the mood of the academy and were more like vigilantes than legitimate enforcement. They do, however, seem to legitimately care about the school, even organizing a nightwatch to protect the campus.

They are also very discriminatory against Japanese, assaulting them even for minor offenses such as obstructing walkways. They also overreact to the vandalization of school property, even pulling a gun on those who deface the statue of Clovis.

The Student Self-Defense Force chasing down the Vandals 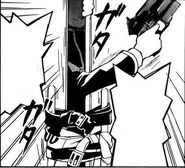 Despite being students one of them have access to firearm
Add an image to this gallery
Retrieved from "https://codegeass.fandom.com/wiki/Student_Self-Defense_Force?oldid=73911"
Community content is available under CC-BY-SA unless otherwise noted.