Sophie Wood (ソフィ・ウッド, Sofi Uddo) is a member of the swimming club and Shirley Fenette's roommate at Ashford Academy in the first season.

Sophie has moderately long purple hair that reaches down below her shoulders with two locks going over her upper chest, with the front portion cut just over her eyes with a small break on the left. Her eyes are of a brown colour. She appears to be slightly shorter than Shirley.

Sophie was first mentioned in the third episode by some girls telling Kallen that Sophie was worried about her as Kallen was missing too many classes.

She first appears in the fourteenth episode as she is woken up in her dorm by a tearful Shirley writing a note about recent events. Not seeing the note, Sophie assumed it was a love letter to Lelouch. She is later Geassed into leaving her dorm room in order for Lelouch and C.C. to search it for any evidence of Shirley discovering Zero's identity.

She later appears in the sixteenth episode in a scene where Shirley was looking for her diary and makes a small cameo in the seventeenth.

Sophie was a close friend to her roommate Shirley, who she could talk to about anything.[1][2] 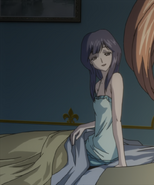 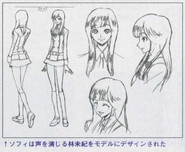