Using the MR-1 as the base, the Somerset was designed by Wilbur Millville, the former Weapons Development Head of Steiner Konzern, by utilizing his independent flight research for Knightmare Frames. In Fortress mode, the Somerset is capable of independent flight, but in exchange for its flight ability, it sacrifices its abilities in Knightmare Frame mode. However, it poses a sufficient threat with the absolute power its aerial battle strength provides. Its only weapons are two Coil Guns that are built into its arms and two standard chest-mounted Slash Harkens.

Several Somersets were deployed by the Wings of Talleyrand during their terrorist attack on the capital Pendragon from the coast in 2017 a.t.b. However, the attack was stopped by the Britannian Military spearheaded by the Knightmare forces of the Glinda Knights, and all of the Somerset units were destroyed in battle as a result. 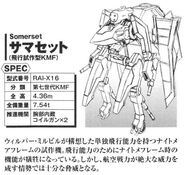 Somerset attack Grandberry
Add an image to this gallery

Retrieved from "https://codegeass.fandom.com/wiki/Somerset?oldid=66116"
Community content is available under CC-BY-SA unless otherwise noted.