The Siegfried, developed in secret with funding from Prince Schneizel el Britannia, is part of the clandestine research project Code R. Originally founded by Schneizel's late brother Clovis, Code R is dedicated to the research of individuals linked to the mysterious power known as Geass. The massive Siegfried, classified as the first Knight Giga Fortress rather than a Knightmare Frame, makes use of both the latest Knightmare technology as well as data from Code R.

Rather than a standard cockpit, the Siegfried uses a special system wherein the pilot's nervous system is connected directly to the machine's control system, allowing for complete mental control. According to Jeremiah Gottwald, due to its unique control interface, the only ones capable of piloting this unit are himself and V.V. The cockpit is also considerably larger, allowing the pilot to move freely inside while standing. With the use of the Float System first seen on the Avalon and a number of verniers (thrusters) all over its body, the Siegfried boasts excellent mobility despite its size. Its armament consists of a set of Slash Harkens, which consist of the five conical structures on its frame and two ordinary versions mounted on the front, and generators which can electrify the hull to keep enemies at bay. Using the conical Slash Harkens, it can perform a devastating attack in which it spins like a top and obliterates anything in its path. Its tough construction and energy shields make it incredibly durable; it manages to survive having a building dropped on it without taking even cosmetic damage. The Siegfried can spin rapidly to generate a "shield" to block most bombardments.

The Siegfried was stolen by Code R test subject Jeremiah Gottwald in the finale of the first season, having gone into a psychotic rage upon hearing the voice of terrorist leader Zero. He uses the Siegfried to pursue and engage the Gawain upon breaking loose from a research facility. C.C. ultimately resorted to a kamikaze attack, wherein she ensnared the Siegfried with her Knightmare's Slash Harkens and dragged them both into the depths of the Pacific Ocean. Jeremiah manages to escape somehow and the Siegfried ends up in the hands of the Geass Directorate.

Electrical generators were added to the hull and a control chair was placed in the cockpit so that it can be piloted by V.V., but it was defeated by the combined efforts of Princess Cornelia and Lelouch after Cornelia's customized Akatsuki unit struck the Siegfried's only weak point, its electrical generators, which severely weakened the unit's overwhelming defensive power. It was finally brought down by a shot from the Shinkiro's "Zero Beam". The wreckage of the Siegfried was eventually salvaged and combined with a Sutherland to create a new Knight Giga Fortress, the Sutherland Sieg, to be used by Jeremiah while he served under Lelouch.

A Nintendo DS game of the Code Geass series featured a pink version of the Siegfried, referred to as the Siegfried Kai, which was piloted by Euphemia li Britannia. 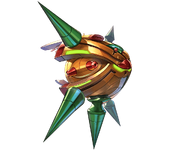