The 'Shinkirō' (蜃気楼 Shinkirō) is an Eighth Generation Transformable Knightmare Frame constructed for Zero’s (Lelouch vi Britannia) personal use. It possesses an integrated Air Glide System for flight and can transform into a submarine/jet-fighter to move underwater and/or fly, which Lelouch uses to travel to and from Japan undetected. Its armor is primarily black and gold, and it has several unusual physical features. Its feet are not round, instead consisting of eight large toes, and its head has four eyes. Its cockpit is also much wider. In addition to the standard control yoke system, the Shinkirō has keyboard-based controls similar to those used on the Gawain.

The Shinkirō possesses an Absolute Defense System (絶対守護領域, Zettai Shugo Ryōiki) which uses an array of hexagonal energy shields that can be projected over any part of the Knightmare. Its Druid System, adapted from the Gawain, plots the trajectories of incoming projectiles and shifts the shields accordingly, giving the Shinkirō the highest defensive power of any Knightmare Frame. All these are controlled by the Druid system and the keyboard-based controls. The system requires incredibly complex calculations to form effective barriers, such that it takes an intellect on the level of Lelouch to use the system to its full potential. When Rolo Lamperouge attempts to use it, he is only able to erect a meagre defense with a number of weak spots. At its full potential, the Absolute Defense System can block a sustained point-blank blast from the Mordred’s Stark Hadron Cannon, albeit at the cost of much of its power reserves.

Its main weapon is a chest-mounted Diffusion Structure Phase Transition Cannon (拡散構造相転移砲, Kakusan Kōzō Shō Teni Hō), otherwise known as the "Zero Beam". When activated, a prism-like object is fired from the Shinkirō’s chest. The Shinkirō then fires a powerful beam into the prism, which refracts the blast into dozens of devastating pinpoint lasers. The beam can be fired without launching the prism for a concentrated attack. The shields must be deactivated for the weapon to be fired. The Shinkirō also has a pair of Hadron Blasters mounted on the underside of its wrists which fire sphere-shaped blasts, rather than continuous beams.

Interestingly, the Shinkirō does indeed feature a set of Slash Harkens, concealed within its knees. The unorthodox design requires the Shinkirō to bend its knee in order to fire them. Lelouch scarcely ever uses this weapon, leading many to believe that it does not exist on the Knightmare. However, a case could be made that the Slash Harkens are in the perfect location to be used in Fortress Mode. In addition, the Shinkirō mounts at least one missile or grenade launcher, which was never used in combat. Its single operation was within the Thought Elevator, in order to deploy an amount of reflective Chaff with which to disrupt Emperor Charles' ability to use his Geass effectively while allowing Lelouch to use the reflective surfaces to deploy his own.

Shinkirō is a transformable Knightmare Frame. Thus, like the Tristan, it is able to transform into a Knight Fortress. It is mostly used for transport rather than combat use. It is able to travel from the air to under the sea due to it's integrated Air Glide System. When transformed, the Shinkirō lowers it's head into the torso much akin to Guren-type units. The Shinkirō also shares the same black and gold color scheme as its predecessor, the Gawain. Whether this is a personal request from Lelouch or merely a tribute to the larger Knightmare Frame from which it was developed remains unknown.

The Shinkirō first made an unofficial appearance when the Black Knights' Knightmares were delivered to Horai Island after their exile and journey to the Chinese Federation. However, the Shinkirō, piloted by Lelouch, made its operational appearance at the Battle at the Mausoleum of Eighty-Eight Emperors. Lelouch used it to save Empress Tianzi, Xingke, and the Shen Hu from the Gun-Rus of the Chinese Federation using its Absolute Defense System and then destroyed almost all of them using its Zero Beam.

The Shinkirō then appeared in Lelouch’s operation to destroy the Geass Order and destroyed the Siegfried, which was piloted by V.V., with unexpected assistance from Cornelia. In this operation, the Shinkirō is shown to be able to fire the Zero Beam without launching its prism.

It also appeared in the Second Battle of Tokyo, in which its two primary weaknesses are shown. When engaged by the Mordred, Lelouch did not counterattack, as he had no melee weapons, but merely defended. Later, Knight of Ten Luciano Bradley exploited the Shinkirō’s need to lower its shield before firing to damage its firing prism. Bradley and his Grausam Valkyrie Squadron would have destroyed Lelouch if not for the lightning-swift destruction of the Valkyrie Squadron by Kallen in her Guren S.E.I.T.E.N. Eight Elements.

The Shinkirō is later used, albeit poorly, by Rolo Lamperouge to rescue Lelouch after the Black Knights turn on him in their flagship. Rolo could only erect a meagre defense using the Shinkirō’s Absolute Defense Field, and was only able to escape and outrun the Mordred due to his Geass. Due to his inexperience with the unit, Rolo was forced to overexert his Geass in order to successfully escape the Black Knights, resulting in his death.

Lelouch would later continue to use the Shinkirō during his ascension to Emperor of Britannia, and used it in conjunction with Suzaku’s Lancelot Albion to prevent a F.L.E.I.J.A. warhead from detonating above Mt. Fuji. Lelouch then used the Shinkirō’s shields to create an opening in the Damocles’s Blaze Luminous, allowing the Lancelot, along with several other Knightmares, to enter the floating fortress. However, upon breaking in, Lelouch and Suzaku quickly encounter Gino in his new Tristan Divider. The Tristan briefly engages the Shinkirō in combat, but even the Absolute Defense System Shield proved insufficient against the Tristan’s new swords fashioned from the Galahad’s "Excalibur" MVS. After realizing that he was outmatched, Lelouch tried advancing deeper into Damocles, but Tristan tosses one of his swords and it impales the Shinkirō in the back, immobilizing and destroying it, Lelouch being forced to abandon it as he continues into the Damocles.

A closeup of the Shinkirō.

The Shinkirō using its Absolute Defense system to protect Xingke and Empress Tianzi. 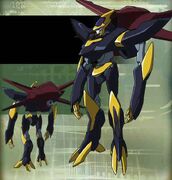 Emperor Lelouch on His Shinkiro.