Code Geass Wiki
Register
Don't have an account?
Sign In
Advertisement
in: Characters, Male, United States of Japan,
and 2 more

Shinichirō Tamaki (玉城 真一郎, Tamaki Shin'ichirō), 24 years old (25 at R2), was a member of the Japanese Resistance and one of the original members of the Black Knights who was the leader of the second special squadron of the Black Knights during the first season, but after the restructuring, he became the internal cleaning supporter. After Zero Requiem, he owns a bistro in Japan.

Tamaki is a hot-headed and carefree person, quick to cheer others on when not doing the fighting but rash and impulsive when he's on the front lines. His rashness is shown to border on recklessness, as he orders the execution of the Ashford Academy student council against Zero's wishes, though extenuating circumstances prevent his orders from being carried out. He is somewhat racist in his own right, but has been shown to even threaten other Japanese, such as when a group of them blame his group for the destruction of Shinjuku. He pilots a standard Knightmare Frame during battles, though he rarely lasts long before being forced to eject. Tamaki is shown (in R2 Episode 13) to be one of Zero's least valuable assets, as Lelouch's monitor shows Tamaki's stats at 40, while the other major crew members have stats ranging from 175 (Nagisa Chiba) to 345 (Kyoshiro Tohdoh) showing he is more useful as comic relief.

He is initially skeptical about Zero, but comes to be one of his most vehement supporters, particularly after the Special Administrative Zone for an independent Japan fails. Even after being captured and imprisoned for a year following the failed Black Rebellion, he never gives up hope that Zero will rescue them, despite the fact that Zero was reported as dead.

Tamaki seems to be the most critical of C.C.'s involvement in the organization despite her lack an official position, complaining that she's only there because she is Zero's mistress, which she replies to by insulting him. In the second season, this appears to have been lightened into simple back and forth banter. Tamaki also complains about his own lack of an official position in the second season (what happened to his old position is not revealed), wanting to be in charge of finances in some way (Lelouch relieved him of this responsibility early in the first season when he spent much of their money on frivolous dinners). C.C. jokes that he's in charge of banquets to annoy him. With the formation of the United Federation of Nations and the Black Knights' appointment as its unified army, Tamaki is made the Internal Cleaning Supporter. When Lelouch is exposed as Zero, Tamaki takes it the hardest, being the last to accept that Zero could have manipulated them all this time. Despite this, he seemingly accepts it fully, threatening to kill Kallen when she isn't quick enough to abandon Zero, and yet he claims to have always trusted him when Lelouch repeals the Numbers System.

After Lelouch's death, Tamaki honors Zero by naming his restaurant the Cafe Zero which becomes successful due to Tamaki's unexpected talent in business.[1]

Tamaki makes his first appearance with the other members of the resistance during the battle at Shinjuku Ghetto. After Lelouch makes contact with them, he is the first to be skeptical about him. He decides to follow his orders and pilots one of the Sutherlands that were provided for them to use. He along with the other members of the resistance are then easily defeated by Suzaku and his Lancelot. He is able to regroup with the remaining resistance members and elevens who have escaped from the Britannian Military. After arguing with Ohgi about listening to someone they don't know, a group of Britannian soldiers find them. Tamaki states that they should have used the poison gas and curses Nagata's name for not doing so. However, before the Britannians could fire, a ceasefire was ordered by Clovis.

Following the Shinjiku Ghetto incident, Ohgi and the others met with Zero in order to find out more about him. Zero gives them the offer to join him, but they are hesitant as he wears a mask not willing to reveal his true identity. As a result, Zero tells them, he will rescue Suzaku Kururugi to prove himself. Tamaki was reluctant to join with Lelouch, as Zero, when he concocts a plan to save Suzaku. After the formation of the Black Knights, he becomes the leader of the second special squadron. He later participates in the battle of Narita where again he still holds some resentment towards Zero after finding out that they are trapped, but afterwards still follows his commands.

During the first battle of Tokyo, he is seen alongside Zero and Kallen at Ashford Academy. After Zero leaves, he is in charge of watching the students while helping Rakshata with the captured Lancelot. However, he is distracted by Arthur and as a result, Suzaku was able to regain his Lancelot.

After the failed rebellion, Tamaki was arrested by Britannian forces, and was to be publicly executed by Guilford. He still had hope that Zero would come and save him, and that would end up being true as Lelouch appears to save the Black Knights.

He later appears in the ambush to kidnap Viceroy Nunnally. He attempts to drop off Minami onto the ship, but is unable to resulting in Minami to eject. Afterwards, he is on a raft boat with Asahina as they watch the first appearance of Kallen's Guren Flight-Enabled Version.

During their stay at the Chinese Federation, the Black Knights are granted Penglai Island by the High Eunuchs. The Black Knights then start their mission to kidnap Empress Tianzi on the day of the wedding to whom she would marry Odysseus eu Britannia. After capturing her, the Black Knights are followed by Xingke and his forces and are forced to fight. Tamaki is sent out as part of the forces only to be caught in the trap that Xingke had setup to catch them all off guard with the irrigation water. The water caused all of the knightmares to sink into the ground. As a result, Zero gives the command to retreat by drawing their attentions with the Ikaruga while Tohdoh gets everybody else out. After falling back to the Mausoleum of Eighty-Eight Emperors, the High Eunuchs lose the trust of the Chinese Federation which causes the Britannian forces to withdraw. Tamaki is once again sent out to push back the remaining Chinese forces.

He is sent to aid Zero during the second battle of Tokyo, but is unable to find him. Finally, after spotting him in a battle with Luciano Bradley and the Valkyrie Squadron, he attempts to help him, but is instead results with an opposite effect of Bradley destroying his knightmare. After the Second Rebellion when Schneizel reveals Zero's true identity, at first Tamaki couldn't believe it, but afterwards has no choice and accepts it. He is later seen at the betrayal of Zero alongside the other core members of the Black Knights insisting that Kallen move out of the way so they can execute Zero. However, they are not able to kill him as Rolo appears with the Shinkirō to rescue Zero. He even argues how he liked Lelouch as Zero.

He participates in the final battle engaging Suzaku only to have his knightmare to be cut in half. However, not allowing to go down and because of his pride continues to fight until Suzaku destroys his knightmare causing him to eject. As a result of his action, allowed Xingke to board the Avalon. He is seen not long after ejecting all wrapped up and shouting that "its not fair" while Ayame attempts to calm him down.After Lelouch has obtained control of the Damocles, he is once again captured alongside the other members of the opposition. He then witnesses Lelouch's death and later released, and is last seen opening a new bistro and at Ohgi's wedding. 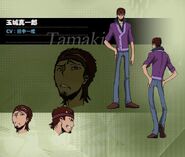