Shin Hyuga Shaing (シン・ヒュウガ・シャイング, Shin Hyūga Shaingu) is a Britannian knight of the Britannian Military and the leader of the Knights of St. Michael. Shin is a Geass user, but the exact specifications of his Geass ability are yet to be revealed.

When Shin uses his Geass on Lord Michele Manfredi, by giving him the command to "Take a Trip", he commits suicide.

It is revealed from flashbacks that he is Akito Hyuga's older brother who commanded him 'to die' by using his own Geass on him. It is unknown how Akito survived. According to Akito, they have been separated for 10 years and that the reason his brother wants to kill him is because they have the same blood running through them. Akito intends to return the favor and kill him.

Shin was apparently adopted into a noble Britannian family where he has a Britannian mother and younger sister, that he cares about.

Shin has proven to be very obsvervant, as he deduced that Zero is still alive and is in fact Julius Kingsley himself after a single conversation with him. Specifically, he noticed the similarity between Zero's methods and the "Ark Fleet" plan Kingsley has put in motion against the E.U. Furthermore, he even figured out Kingsley is in reality the eleventh prince of Britannia after Julius muttered the name Nunnally. Shin also remarks that he and Suzaku are similar. He particularly mentions that Suzaku has darkness inside him, which seems to refer to how the latter killed his father during the attack on Japan that led to its annexation as Area 11, compared to Shin having killed his own parents as well.

Shin later reveals his true agenda to Leila that he wants to cause bloodshed between the 3 superpowers by nuking Pendragon along with Emperor Charles.

Shin and his nasty smile revealing an intention

Shin with his Knightmare. 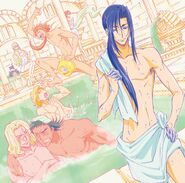 Storyboard frame
Add an image to this gallery
Retrieved from "https://codegeass.fandom.com/wiki/Shin_Hyuga_Shaing?oldid=56777"
Community content is available under CC-BY-SA unless otherwise noted.