Shesthaal was a tall man with olive hair and green eyes. While not being well built, he was still athletically capable.

He was an incredibly confident man who held himself above the people around him.

While he was intelligent, he would still fall victim to his hubris when he believes he has the upper hand in a battle. 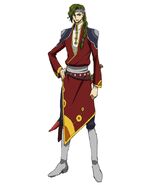 Retrieved from "https://codegeass.fandom.com/wiki/Shesthaal_Forgnar?oldid=77877"
Community content is available under CC-BY-SA unless otherwise noted.