A Knightmare Frame model developed by Rakshata's team at the same time as the Guren, the Shenhu (神虎, Shenhu, lit. "Divine Tiger") was given to the main forces of the Chinese Federation by the Maharajah. However, it was left in storage because piloting it was too physically demanding, and thus a suitable pilot could not be found. Li Xingke proves capable of piloting it, but even at forty percent power the task proves very stressful. The Shenhu has blue armor with red and gold parts, and its head unit has an intricate design with a red spike protruding from the top. In addition, it has white armor plates on the its shoulder and waist which can be used as shields.

Having been built by the same team that developed the Black Knights' Knightmares, the Shenhu is equipped with the same type of Air Glide Wing System. Mounted in its torso is the powerful Baryon Cannon (天愕覇王重粒子砲, Tengaku Haoh Juuryushi Hou, lit. Heavenly frightening overlord heavy particle cannon), a weapon similar to the Hadron Cannon; at forty percent power, it is able to match the full force of the Guren Flight-Enabled Version's improved radiant wave surger; at an unknown (possibly full) level of power, it can completely shatter Blaze Luminous shielding. Its main weapons are two dagger-shaped Slash Harkens mounted on its wrist. By wrapping or impaling an enemy with the Slash Harkens, the Shenhu can send a powerful electrical charge along the cable, instantly destroying the Knightmare on the receiving end. The Shenhu's wrist armor can also spin in place to turn the Slash Harkens into powerful flails which can double as shields. Finally, the Shenhu has a short sword stored near its shoulder. The short sword is retractable and can produce a blade on either side of its hilt when fully activated. 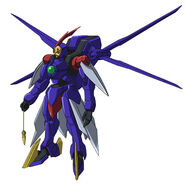 Equipped with air glide wing system
Add an image to this gallery
Retrieved from "https://codegeass.fandom.com/wiki/Shen_Hu?oldid=16522"
Community content is available under CC-BY-SA unless otherwise noted.