Shamna is a relatively tall woman with long blonde hair and blue eyes. She has a fairly average yet curvy body and has a Geass sigil on her pelvis.

Shamna is displayed as a self-centered woman who only cares about her power and holding her position above her subjects, it can be seen that she does deeply care for her brother. However, she also seems to use her brother as a method of displaying her "prophecies" to the people of her kingdom. However, her ultimate motivation is to save her struggling homeland that is upon hard times due to the peace created by the Zero Requiem and the betterment of her brother Shalio.

She holds herself above her guards and seemingly doesn't care whether they live or die. Whether or not this is just due to her Geass changing her perception of life and death is yet to be seen.

Shamna's Geass allows her to send her consciousness six hours back in time whenever she dies. This allows her past self to have "visions" of future events, allowing her to plan around them. When she activated her Geass, the geass symbol turns to a color of gold/yellow. It is also unknown if there are repurcussions to her ability, if she dies even earlier than her previous death.

She claimed that her Geass originally allowed her to see the future, but it changed along with her ideology. It is unknown whether her limit was still 6 hours when she had her previous Geass.

The exact properties of the new power, "Failed One", are currently unknown. It is demonstrated that this power does not provide immunity to geass nor immortality. It does however, prevent the bearer from aging, thus giving them eternal youth. The location of the mark varies over time as it wanders over the body. Unlike code bearers, bearers of this new power cannot retract someone's geass power. Currently, Shamna and Lelouch are the only bearers of this new power. 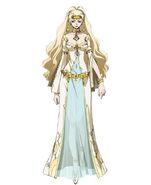 Add an image to this gallery
Retrieved from "https://codegeass.fandom.com/wiki/Shamna?oldid=77931"
Community content is available under CC-BY-SA unless otherwise noted.