Sayoko Shinozaki (篠崎咲世子, Shinozaki Sayoko), 24 years old (25 at R2), is a kindhearted Japanese woman who serves as a maid to the Lamperouge siblings in their residence. She was very loyal and respectful to Lelouch and supports him at every decision he made. She was one of the few people that knew about Zero Requiem and possibly played a role in it.

She was originally Milly Ashford's personal maid, but was reassigned to Lelouch and Nunnally when they were placed under the Ashfords' care. She taught Nunnally how to make origami and assists in taking care of her whenever Lelouch is not around.[1] The DVD releases for the series occasionally promote a segment called "Sayoko's Diary", which depicts her view of the daily life at the Ashford Academy, humorously skewed by her limited knowledge of the bigger picture behind the events that take place.

She is the 37th Successor of the Shinozaki School (篠崎流, Shinozaki Ryuu) of martial arts, and is referred to on her official profile as a Supermaid (スーパーメイド, Suupaameido).

While she is Japanese, as noted by Jeremiah Gottwald, Sayoko shows strong loyalty to Lelouch as she went to him, instead of the Black Knights which shows that she defected from them, during the time when Emperor Lelouch declared war on the entire world. Lelouch seems to trust her greatly as Sayoko was the first person, within the Black Knights, to whom Lelouch willingly revealed his identity and the second Japanese, after Taizō Kirihara, to whom Lelouch chose to remove is mask for.

Sayoko makes her first appearance in episode 3, teaching Nunnally how to fold an origami. In order for Lelouch to ease Kallen's suspicions of his identity, he creates a cunning deception by using Geass on Sayoko to make her play a recorded message to Kallen on the phone.

Near the end of the first season, Sayoko is recruited into the The Order of the Black Knights by Diethard Reid as a spy. In one of her diary segments, her recruitment process is seen to consist of an odd combination of quizzes, swordplay, and baseball, all of which she is able to pass with apparent ease in spite of her appearance. C.C. is the one who ultimately lets her in.

In the second season, she returns from the Chinese Federation, having escaped there with Diethard and Rakshata after the failed rebellion one year previous. She oversees the delivery of the glacier ships used to transport the one million Zero-dressed Japanese citizens in the eighth episode, where Lelouch reveals his identity as Zero to her. With the aid of a mask installed with a digital voice changer, she subsequently serves as a body double for Lelouch at Ashford Academy while he is away. Having spent years serving the Lamperouge siblings, she is able to play the part convincingly, but Rolo complains that she is too nice, a trait Shirley Fenette also picks up on. Though she is able to play the part somewhat convincingly, her aforementioned slanted viewpoint of his daily life leads her to believe that he is a womanizer, and she portrays him as such, to his dismay. Furthermore, she also openly displays her athletic prowess during one of Milly's festivals, another contrast with the physically unfit Lelouch. During the second battle of Tokyo, she leads a mission with Rolo to secure Nunnally, only to be apparently caught in the blast radius of the F.L.E.I.J.A. bomb.

However, both she and Nunnally manage to escape and wind up with Schneizel. Sayoko escapes and returns to Lelouch to warn him about Schneizel's plan to have Nunnally control Lelouch. Jeremiah comments on her seemingly odd choice of loyalties (following a Britannian despite being Japanese), and remarks that she, like himself, seems to follow the path of chivalry. When the Avalon is boarded by the Black Knights, Lelouch orders her to release the UFN hostages under the guise of betraying him. She is later imprisoned alongside Rakshata, Nina, and Cecile but is later set free.

In Code Geass: Nunnally in Wonderland, Sayoko plays the role of the Dodo Bird. When Nunnally washes up on a beach not long after entering Wonderland, the Dodo Bird appears and takes care of her, during which she gives Nunnally a bath, gives her a fruit drink, and irons her clothes. 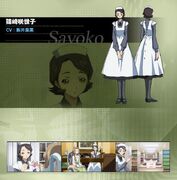 Retrieved from "https://codegeass.fandom.com/wiki/Sayoko_Shinozaki?oldid=54268"
Community content is available under CC-BY-SA unless otherwise noted.