Sancia (サンチア, Sanchia) is a dark-haired woman who serves as a field captain for the Irregulars and as Colonel Madd's assistant. After the final battle, she and her teammates are seen helping around the Ashford Academy which has been transformed into a temporary refugee camp, she helps an organizer and to keep Dalque in check.

Sancia is shown to be cool, calm and collected, a fitting personality for her role as the leader for the Irregulars. Compared to her other sisters, she is the most matured of them all and acts as a sort of big sister to the group. She also deeply cares about the well-being of her sisters and is even willing to disobey direct orders from her superior officer to save one of her own during the hunt for Alice.

Sancia serves as field captain for the group and as sniper. She possesses a Geass ability known as "The Order," which accurately identifies the positions of targets within a given range and precisely calculates their probable movement trajectories based on all known variables. The results of her calculations are instantly submitted to her Knighmare Frame via a cockpit neuroimaging device and collated with radar information before being distributed to her team for tactical purposes.

She is typically partnered with Lucretia, whose terrain-mapping Geass ability complements her own.

She is the pilot of her own Variant of GX 01 Knightmare Frame until it is destroyed by Cardinal Rolo vi Britannia during the subsequent hunt for Alice. 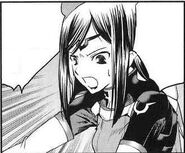 thumb|Sancia with her Geass Sigil active.

Sancia in her Irregular Uniform 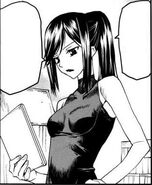 Sancia helping in the refugee camp after the final battle
Add an image to this gallery
Retrieved from "https://codegeass.fandom.com/wiki/Sancia?oldid=66382"
Community content is available under CC-BY-SA unless otherwise noted.