Rolo Lamperouge (ロロ.ランペルージ, Roro Ranperūji), 16 years old, is a character introduced in the second season of Code Geass: Lelouch of the Rebellion R2. He is voiced by Takahiro Mizushima, while he is voiced by Spike Spencer in the English dub.

Rolo is a trained assassin, having killed many powerful figures during his life. He has had his Geass powers from the age of six. His main assassination method is to use firearms at close range, but he is also known to utilize and handle other weaponry expertly, including knives and poison. It is unknown what his real name is, but he quite frequently employs the codename "Rolo Haliburton".

While Rolo puts up a front of being very shy and withdrawn at school, this exterior hides a ruthless and detached killer who will do whatever it takes to complete his mission. While working with the Britannian Secret Intelligence Service, he is aloof and doesn't seem very interested. He often stays in the background and simply listens, and isn't afraid to be very blunt of their faults. In the third episode of R2, he kills a member of the Intelligence Service simply for hearing part of his coversation about Geass with Villetta Nu. When Villeta questions how many he had killed (indicating a large body count), he merely replies, "This is the best and fastest method, right?".

Despite his attitude towards the mission, he is devoted to Lelouch. Despite his urge to kill Zero, he never looks at him badly and immediately supports him. Lelouch's year without memories show him and Rolo quite happy, particularly when Lelouch gives him a heart-shaped locket as a birthday present, which he keeps attached to his cellphone. He even refuses to return it after Lelouch regains his memory. It is also clear that he has also been heavily affected by his time with Lelouch. Because of this, he was easily manipulated into believing that Lelouch cares for him after Lelouch pretends to have saved his life. Lelouch originally planned to throw him away after he makes good use of him.

Rolo is introduced in the second season as Lelouch's younger brother. He is unsociable and reserved, unlike his older brother, a trait which does not gain him many friends at school. His most prized possession is a locket given to him by Lelouch on his birthday. Unbeknownst to Lelouch, this is actually a lie; Lelouch's life has been fabricated by the Emperor of Britannia, and Rolo is a spy keeping watch over him.

In the first episode of the second season, Lelouch is reunited with the Black Knights and C.C., who restores his memories. Knowing that his brother is a fake, he turns his attention to restoring order to the Black Knights under the guise of Zero. Rolo, piloting his prototype Vincent Knightmare Frame, wipes out nearly all of the units under Lelouch's command using his Geass. He nearly kills Lelouch as well, but Urabe's sacrifice and the explosives placed by C.C. allow Lelouch and his Knights to escape to the Chinese Consulate. Rolo follows and nearly uses his Geass to bypass the heavy guard at the entrance, but Lelouch calls him from school, having recorded his speech and switched places with C.C. beforehand, convincing Rolo that Lelouch is not Zero. Lelouch later attempts to ambush Rolo and reveal who he is, only to have the situation reversed when Rolo uses his own Geass.

After learning of Rolo's past as an assassin, Lelouch convinces Rolo that he will bring him C.C. the following day. Using his Geass on David T. Darlton, Lelouch commands him to open fire on Rolo's Vincent with his sniper rifle-equipped Knightmare. Lelouch takes the bullet for Rolo, turning Rolo to his cause. When Nunnally vi Britannia's appointment as the new Viceroy of Area 11 sends Lelouch into depression, Rolo tries to convince him to give up being Zero and remain at the school to protect everyone. This instead inspires Lelouch's idea to have the Black Knights exiled, protecting Nunnally, the school, and all of Japan from the chaos the Black Knights create. While Lelouch has himself and the Black Knights exiled to the Chinese Federation, Rolo stays behind at Ashford Academy to help keep up the appearance that Lelouch hasn't become Zero again.

Following Jeremiah Gottwald's attack on Ashford Academy, Rolo encounters Shirley Fenette while searching for Lelouch in the train station, whereupon she reveals that she has recovered her memories and that she wants to help Lelouch reunite with Nunnally. At this, Rolo mortally wounds her using his Geass power and plants the gun in her hands to make it appear as a suicide.

Shortly after Lelouch speaks with Shirley in her final moments, Rolo reappears and claims that he killed Shirley because she had regained her memories and was chasing Lelouch with a gun. Lelouch claims to forgive Rolo and commends his action, but Lelouch secretly rigs his Vincent with a bomb, intending to kill Rolo during the assault on the Geass Directorate as retaliation for killing Shirley. His plan is unknowingly disrupted by Cornelia.

During the battle for Tokyo, Lelouch entrusts Rolo with retrieving Nunnally, but Rolo intends to kill her. Sayoko retrieves her while Rolo covers them in a stolen Sutherland. He tells Lelouch that she is dead after the F.L.E.I.J.A. bomb destroys the government complex. Lelouch passes out on the battlefield, so Rolo carries him into his room. Rolo's attempts to comfort Lelouch only to anger him, and he accuses Rolo of being a false brother, even admitting that he tried to kill him repeatedly. When the Black Knights learn Lelouch's true identity and betray him, Rolo uses the Shinkirō to evacuate Lelouch, freezing all in his path using his Geass. Despite Lelouch's protests, Rolo uses it to such an extent that it overtaxes his heart. He dies after managing to escape their pursuers, but content in the knowledge that the time he spent with Lelouch was real and, while he may have been used as a tool by everyone around him, possibly even Lelouch, his final action was of his own free will. Rolo states that he refuses to believe that Lelouch meant what he said before, and as he dies Lelouch tells him that he's right, recognizing in his thoughts the lie he'd just told even then. Lelouch digs a grave for Rolo, leaving the locket on the marker. He muses that Rolo was the brother of Lelouch Lamperouge, the Ashford Academy student, not Lelouch vi Britannia, and that he will not waste the life Rolo gave him.

Rolo is also a trained assassin, having been raised as such since he was a child. According to his Secret Intelligence Service profile, he is quite skilled in firearms and other weaponry including explosives, poisons, knives, and much more. He is also a skilled pilot, using his Vincent Knightmare Frame in combination with his Geass to throw his opponents into confusion and shock.

Rolo's Geass is known as the "Ward of Absolute Suspension", which is the ability to suspend the subjective sense of time of everyone within a given range. Those under its effect are frozen in place for the duration of its activation. When activated, a Geass sigil manifests in his right eye and projects a red sphere representing the area of effect. Its range is determined at activation; while no upper limit is given, it can at least reach several hundred meters. Physical obstacles or electronic equipment do not hinder its effectiveness, nor does it require eye contact. The same people can be frozen repeatedly. Despite long-term possession of the ability, Rolo's Geass remains under his control, unlike Lelouch.

The weakness of Rolo's Geass is that his heart stops when he uses it, limiting its activation to short bursts. The range also determines the amount of strain it puts on him. Finally, it is unable to stop inanimate objects or physical phenomena such as speed and momentum. (For example, it can neither stop a clock nor a projectile in mid-flight)

In a video game for the PlayStation2 and PlayStation Portable, Code Geass: Lost Colors, Rolo is sighted on Kamine island together with V.V.

If the player decides to attack first with the protagonist Rai's Geass, Rolo uses his Geass power and kills Rai with a knife, resulting in a game over. If the player chooses not to use the Geass ability, Rai instead ends up throwing a grenade in an attempt to escape. It detonates while still in the air, far faster than he expects — possibly due to Rolo's Geass ability.

Lelouch's twin brother, who had apparently been taken from Marianne when he was a baby, due to the superstition of twin princes bringing misfortune. Therefore, his existence was unknown to Lelouch and Nunnally. He is involved with the Geass Order and known as The Cardinal. He first appeared in chapter ten with Schneizel, who is heading to Area 11, and later meets Suzaku, who can tell that he's not Lelouch. Like Nunnally and Lelouch, Rolo has access to wired Geass powers, and is able to summon his own personal Vincent Knightmare Frame. His piloting skills are somewhat ruthless and cold. He plans to kill Nunnally and Lelouch so that he can take their powers to become the true "Demon King" and overthrow the Emperor. His Wired Geass is known as "The Ice," with the power to "freeze time," similar to his anime counterpart. Also like his anime counterpart, it only works in a certain range, referred to in the manga as an "Absolute Territory." It is revealed that he was in fact not Lelouch's twin, having been created artificially from Charles and Marianne's DNA, and was genetically unstable, like the rest of the Irregulars, ultimately resulting in his death.

Lelouch in front of Rolo's grave. 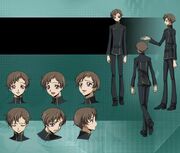 Retrieved from "https://codegeass.fandom.com/wiki/Rolo_Lamperouge?oldid=37873"
Community content is available under CC-BY-SA unless otherwise noted.