Rivalz is a fairly short young man with semi-long dark blue hair with bangs that spread out to the sides. He is almost always seen wearing the standard Ashford men's uniform (although he wears different clothes when the appropriate time calls for it). When riding his motorbike (an RR1200 BMC), he wears a helmet with goggles attached and red gloves for his hands.

Rivalz is mostly a happy-go-lucky kind of guy who likes to spend time with his friends and have fun. In regard to Milly, he can sometimes be overly sentimental due to his feelings for her not being returned; when he discovered her engagement to Lloyd Asplund Rivalz was devastated and heartbroken. Like most Britannians, Rivalz described them as being superior to Elevens until he met and befriended Suzaku. Because of his amicable nature, during the funeral of Prince Clovis, he was seen giving a half-smile as the Emperor of Britannia gave a speech valuing inequality and social battle for evolution and betterment. During serious events, Rivalz can be seen to be deeply saddened or lamenting such as during his attendance of Shirley's funeral or after explaining to Milly how he missed his friends who were elsewhere fighting.

Rivalz is usually driving Lelouch around on his motorbike as an ante for their bets on chess games. He has a part-time job as a bartender/waiter and carries a deep, affectionate nature for Milly Ashford, especially when it is announced that she is going through a marriage interview. Shown in-series and in the DVD-exclusive bonus material, Rivalz forms a fast friendship with Suzaku after he joins the student council at Lelouch's request. Rivalz's real surname is not Cardemonde, but rather his mother's maiden name, which he uses since his parents became estranged. He was born and partially raised in California.

Rivalz makes his first debut when he and his friend Lelouch enter the room, with Lelouch claiming he can turn the situation on the chess table in under 9 minutes. He starts his game by moving the King. After the game, Rivalz compliments Lelouch on his victory, and is happy that the ego of the nobles will force them to pay, which he notes also make them loose. Rivalz also makes a hint on the difference between Elevens and Britannians, but as they walk out, they are interrupted by Clovis' "heart-breaking" speech. On the road, Rivalz accidentally cuts the way of the terrorists, resulting in their vehicle's crash. People gather, but to Lelouch's disgust, they're more interested in placing the blame and gawking over the incident than helping, prompting him to go and assess the situation.

Arthur, a stray cat, is later chased throughout the school grounds by the entire student body after wandering into the Lamperouge residence and escaping with Lelouch's Zero mask. Milly announced that the one who would catch the cat would get a kiss from any member of the Student Council. Rivalz seizes this chance to get a kiss from Milly upon asking her if members of the Student Council would get a kiss from other members of the Council if they caught the cat, to which Milly says "Of course!" Eventually, Suzaku and Lelouch became the ones that got the cat and got a kiss on the cheek from Nunnally. The Student Council adopt him and build a cat house in the council room. Following this incident, Rivalz (with a half-smile on his face) along with the rest of the student body watch Prince Clovis' funeral live broadcast. During the funeral the Emperor of Britannia makes a speech on the virtues of inequality and the social battle for evolution and betterment.

Rivalz is still part of the Student Council. When Suzaku returns to Ashford Academy, Rivalz immediately welcomes him back, along with Shirley and Milly (the latter decides to hold a welcome back party). By the time Milly is to graduate (thus leaving Student Council), she holds one last celebration called Cupid Day, where any girl can become a boy's girlfriend by stealing his hat and vice versa; to make things more interesting, Milly declares that the first person to bring her Lelouch's hat gets their club's budget increased ten-fold. This leaves Rivalz distraught, but nevertheless tries to hunt Lelouch down so he could make Milly happy. In the end, Shirley retrieves Lelouch's hat and Milly breaks off her engagement with Lloyd. Rivalz is later seen (alongside Milly, Suzaku, Villeta, Gino, Anya, and others) at Shirley's funeral.

After Lelouch, now Emperor, arrived at Ashford for the U.F.N meeting, Rivalz climbed a fence and asked him why he had never mentioned his royal status previously, but was ignored by him. Before he was about to be punished by members of the Black Knights, Rivalz is saved by Nina who told them that they were just about to leave. Afterwards, Rivalz is seen driving Nina away on his

motorbike. However, he notices a Black Knights roadblock up ahead and so took an exit ramp to avoid them. Nina then questions him on why he is saving her, assuming it a favor to Milly. Rivalz refutes and exclaims that it is because she is his friend. Along the exit ramp Rivalz notices another roadblock backed by civilians not knowing that they are under the influence of Geass. He stops and Lloyd comes out to take Nina with him.

Rivalz is seen later on with Milly thinking about how all the other members of the Student Council are out there fighting. He then makes another attempt to talk to Lelouch, but ends up witnessing his death instead. He is last seen among the many guests that had attended Ohgi and Villetta's wedding. 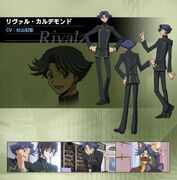