Code Geass Wiki
Register
Don't have an account?
Sign In
Advertisement
in: Characters, United Federation of Nations, The Black Knights,
and 2 more

See The Order of the Black Knights

Rakshata is a very tall, attractive woman with bright blonde hair almost as long as C.C.'s. She has fair brown skin, in addition to a purple bindi on her forehead. Her eyebrows and lips are also thin and slanted.

Rakshata is normally seen wearing a revealing pink tank top along with brown pants and a white lab coat. She is never seen without her thin, brown kiseru pipe, which she typically holds at the tip with her fingers as if holding a conductor's baton.

Rakshata is a calm person, she almost always maintains a cool and seemingly carefree attitude no matter what the situation and is never seen without her trademark tobacco pipe. She is on quite good terms with Zero and several of her colleagues in the Black Knights. Despite her efficiency, Rakshata is very laid back and easy going, usually seen laying on a couch when not actively working (and sometimes even when she is actively working). She even has one installed on the bridge of the Black Knights' flagship, the Ikaruga.

Rakshata is not fond of speaking of the past for unknown reasons. She is very proud of her accomplishments especially when seeing them perform to their fullest, and has been shown several times to be quite intelligent and perceptive, though these traits also give Rakshata a certain amount of arrogance. She affectionately refers to her technological creations as her "children" and treats them with such care, she also becomes enraged when others carelessly mishandle or tamper with them without her permission.

In Oz the Reflection, it is mentioned that the reason that Rakshata entered the field of military technology was in the hope of ending wars, and that she had hardened her heart to do so.

A scientist hailing from the Military District of India, little has been revealed of Rakshata's past but it is known that she studied at the Imperial Colchester Institute. Rakshata has extensive experience in various fields including medical cybernetics, and appears to have been an academy acquaintance of Lloyd Asplund and Cécile Croomy.

Rakshata is the creator of the Guren and its Radiant Wave Surger ( 輻射波動, fukushahadō, lit. radiation surge) weapon. She also developed the Gefjun Disturber (ゲフィオンディスターバー, Gefion Disutaabaa), a force field generator that disables all sakuradite-powered technology within its area of effect. This renders anything within the field invisible to radar, and can aid in the blooming of hadron-based beam weaponry. In Season 2, Rakshata was able to develop a similar Float System called the Air Glide System for the Black Knights' Knightmares.

Rakshata makes her first appearance to meet with Zero and the Black Knights, whom she and India had already been supporting for some time. After meeting Zero, she gives the Four Holy Swords and Tohdoh the newly created Gekka, along with suits that increase life expectancy. After Tohdoh was rescued, Zero decides to restructure the Black Knights knowing that they are growing in number. He appoints Rakshata as head of research and development which she comments with "Who else?"

Following the announcements of the restructure, Zero decides to capture Suzaku when he is with Euphemia on Shikine Island. Zero lures Suzaku into a sandpit that has been surrounded by Rakshata's newly developed Gefjun Disturber that immobilizes the Lancelot. However, she mentions that the endurance and range need more work. Zero goes missing along with Kallen, Suzaku and Euphemia after Schneizel gives the order to fire at them. The Black Knights members are distraught and separated in terms of what to do with Zero missing. Due to Rakshata's Gefjun Distruber which also has a byproduct of a stealth system allows the Black Knights to wait for Zero to make contact.

Zero and Kallen are able to return along with a stolen Gawain. During the Battle for Kyushu, Zero appears to help Suzaku by using the Gawain's Hadron Cannon which

was revealed to be able to converge with Rakshata integrating her Gefjun Disturber.

During the Assault on Tokyo Settlement, Rakshata is seen at Ashford Academy attempting to dismantle the Lancelot which is once again trapped in her Gefjun Disturber. However, Nina appears with the Ganymede which has a prototype nuclear fission bomb attached to it forcing Lloyd to tell everybody to ceasefire. Hearing him sound so scared, has Rakshata reinforce the order to all members of the Black Knights.

It is revealed that Rakshata was able to escape capture after the failed rebellion when Zero announced that he has returned. After the Black Knights have regrouped, Zero decides to capture the newly appointed viceroy of Area 11, Nunnally vi Britannia. Rakshata is able to save Kallen by introducing her newly developed, Air Glide System which allowed the Guren Mk-II to upgrade into the Guren Flight-Enabled Version.

Upon the formation of the UFN and the reorganization of the Black Knights as its military force, Rakshata is designated as the Chief of Science, similar to her previous position within the Black Knights. She reacts to the Black Knights' betrayal of Zero with apathy, more concerned with the aftermath. During the Battle of Mt. Fuji, Rakshata appears with Lloyd and the others, questioning them on why they decided to betray Lelouch.

She is captured and imprisoned along with the rest of the Black Knights after the fall of second prince Schniezel. While incarcerated, she argues with Lloyd over the nature of progress. After Lelouch's death, Rakshata is freed along with everyone else. She is last seen amongst Ohgi and Viletta's wedding guests.

Rakshata makes several appearances in Oz the Reflection, giving Orpheus missions she requests, such as requesting his aid in destroying a Sakuradite mining facility. In addition, she also gives Orpheus the prototype for her Air Glide Wings.

She appears to also have a history with Ganabati, as she mentions that she doesn't need to worry about the Byakuen if he is the one looking after it.

During Rakshata's first appearance in the movie, she is revealed to have a younger sister. 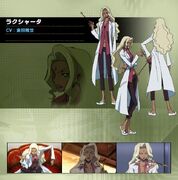 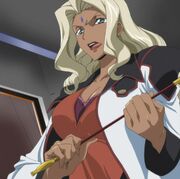 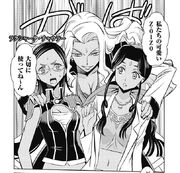 Rakshata with Neha and Kagari

Rakshata with Lloyd in Code Geass Lelouch of Resurrection 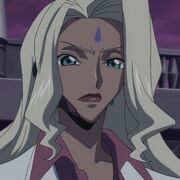