Start a Wiki
A part of the fourth generation of Knightmare Frames, the RMI-13 Portman (ポートマン, Pōtoman) is the first amphibious Knightmare to be produced, while most Knightmare Frame battle took place in the land the Portman is specially created to fill the role of a Knightmare Frame unit for the Britannian Navy.

Much of its outward design is made with hydrodynamics first in mind and is capable of transforming into Cruiser Mode. In addition to the standard Slash Harkens, the Portman has a set of torpedo launchers mounted in its shoulders, and a hydro jet pack mounted on its back. Though intended to operate primarily underwater, the Portman can also be used on land, though its speed and combat skills are poor in this area, though near the end of season 2, the Portman hardly make any appearance and is now possibly being replaced by the Portman II. RMI stands for the Royal Marine Infantry. 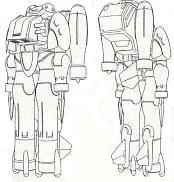 The Portman in Cruising Mode.

A group of Portmans in formation.

Portman Pluton Custom
Add an image to this gallery
Retrieved from "https://codegeass.fandom.com/wiki/Portman?oldid=73647"
Community content is available under CC-BY-SA unless otherwise noted.