Start a Wiki
The Percival (パーシヴァル, Pāshivaru), named after the Knight of the Round Table, is a Knightmare Frame piloted by the Knight of Ten, Luciano Bradley. It participated in the Kagoshima Settlement Battle and Second Assault on Tokyo Settlement, but was destroyed by the Guren S.E.I.T.E.N. Eight Elements shortly after the destruction of the members of the Valkyrie Squadron that were under Luciano.

Based on Lancelot Conquista "Core Luminous Cone," the Sutherland's Lance and the Gawain's Hadron Cannon, this Knightmare Frame was built with similar weaponry based on those armaments. Its armor is oddly bulky, with large cones extending from the wrists, pointed leg armor at the hips and feet, and spikes from its shoulders and Landspinners. It also has an Integrated Float System for flight capability. The Percival's main weapon is a large claw on its right wrist. The claws can reconfigure itself and be spun around, generating a Blaze Luminous field and transforming it into an MVS particle drill-lance. It can also use the slash harkens on its head and shoulders for close-range combat. For long range attack, the Percival's pointed hip armor can open up to reveal Hadron Blasters within, as well as the missile launchers in its shield.

The Percival had participated in many battles against enemies of Britannia (when Luciano Bradley made his first appearance, it's stated that he just got back from fighting at the Belarusian front). During its first appearance, it attacked and destroyed a U.F.N. airship with ease, followed by five Akatsuki units, using its Hadron blasters before destroying a sixth one at point-blank range after Luciano taunted the pilot. It followed up by seizing a small, severely-damaged Britanian floating battleship (with help from the Valkyrie Squadron) (stating that the ship was so damaged that it was going to crash anyway) and tossing at the Da Longdan, but was foiled by Li Xingke and his Shen Hu. After hearing news of the Black Knights attacking the Tokyo settlement, he and the Valkyrie Squadron had dispatched themselves to that battlefield.

After the Mordred failed to destroy the Shinkirō, the Valkyries Squadron quickly used their slash harkens to hold Zero's personal Knightmare Frame on both its arms and shoulders as the Percival attempts to pierce its shields. It was then attacked by three Akatsuki units headed by Shinichirō Tamaki, but Luciano quickly disposed the three with his missile shield. As Zero attempts to fire back, the Percival jabs its chest, knowing the shields had to be lowered in order for the Shinkirō to use its main weapon. As he was about to kill Zero, the Guren S.E.I.T.E.N. Eight Elements quickly flew in destroying the Valkyrie Squadron in one swoop, saving Zero and his Shinkirō. After a brief confrontation, Kallen Kozuki and her Guren quickly disarmed Bradley's Percival, and after a short taunt, killed Bradley and completely incinerated the Percival.

An identical missile-shield used by the Percival was created for and used by the Lancelot Frontier, piloted by C.C. 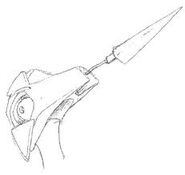 Retrieved from "https://codegeass.fandom.com/wiki/Percival?oldid=73882"
Community content is available under CC-BY-SA unless otherwise noted.