Orpheus Zevon (オルフェウス・ジヴォン Orufeusu Jivon) is the male protagonist of Code Geass: Oz the Reflection (photo story). Originally born into the Zevon noble family along with his twin sister Oldrin Zevon, he now works as a mercenary terrorist under the codename "Oz", receiving and acting on requests across the world from the organization “Peace Mark” that controls and sends out terrorists. He does so for the sake of chasing and achieving revenge against the enemy that took his beloved person away. He does not care who the client is or the reasons for the mission request; he will simply carry it out as specified. Perhaps because of the environment he grew up in, he has a lot of rough behavior, but sometimes he shows his original aristocratic side. He possesses a Geass in his left eye, and eventually his other eye as well.

Orpheus was originally born into the Zevon noble family in Britannia along with his twin sister Oldrin. However, because of the Zevon family tradition of succeeding through the female line and, in the cases of twins, removing the male child from the family, he was thrown away and adopted by a commoner family at a very young age, with little to no knowledge of his birth and family.

Soon after, however, he was taken in by the Geass Order, and was given the "Geass of Transformation" by V.V. there. Thereafter, he spent an unknown number of years within the Order, where he was forced to serve as an experimental specimen and develop his Geass. The only thing that let Orpheus endure these "hellish" days was Euliya, a fellow Geass-user he met within the Order and fell in love with. Also during that period, he met Rolo Lamperouge, Toto Thompson and Clara Lanfranc (the latter would then developed a deep hatred to him.)

At some point, the two of them conspired to escape from the Order so as not to be used as Geass-users, and managed to run away to a small unmapped village in southern Hungary. There, they were accepted by the small community of villagers and managed to attain a poor yet fulfilling life, which Orpheus describes as the "happiest time of his life". However, eventually, the village was attacked by his uncle Oiaguro Zevon and his four subordinates from the "Pluton" organization, on orders from V.V. and Emperor Charles to erase the escaped Orpheus and Euliya. Using Knightmares to burn down the village, they killed all the villagers, except for Orpheus, who was protected by Euliya with her life. While dying in his arms, Euliya used her last breath to ask him to "live", a wish that Orpheus would strive to accomplish, despite his sorrow at her death.

After an unknown period of time, Orpheus would join the mercenary and terrorist-controlling group "Peace Mark", and learned the truth behind his birth and his blood connection with Euliya's killer, Oiaguro. Swearing to achieve revenge against his uncle and his four subordinates who attacked the village, Orpheus "retook" the surname of Zevon that he now despised in order to engrave his decision in his heart, and remained within Peace Mark as a terrorist-for-hire that rebels against Britannia, believing that he would surely one day encounter Oiaguro and Pluton again this way.

During the Glinda Knights' trip to Tokyo, Orpheus rescued princess Marrybell mel Britannia when she was surrounded by the remnants of Black Knights. After that, under the guise of his twin sister (whom he "stole" her identity by his Geass), Orpheus managed to kill Clara who was posing as "Clara Lamperouge" in Ashford Academy under the Office of Secret Intelligence's order. During the last events of O2, he takes a fatal attack intended for Marrybell before stabbing her himself , then together the two fall from the Damocles .

V.V. is the one who gave Orpheus the "Geass of Transformation" . Considering V.V. and Emperor Charles orders his uncle Oiaguro Zevon and his four subordinates from the "Pluton" organization to kill two fugitive Geass user , it's likely that he hates him .

Euliya and Orpheus met during their time at the Geass Order, and she helped him endure the hellish days of his time there. Euliya was a fellow Geass-user he met within the Order and the one he fell in love with . At some point in time, the two planned a successful escape from the Geass Order, and fled to an unmarked village in Hungary. They were accepted by the small community of villagers and managed to attain a poor yet fulfilling life, which Orpheus describes as the "happiest time of his life".

The village was attacked by his uncle Oiaguro Zevon and his four subordinates from the "Pluton" organization, on orders from V.V. and Emperor Charles to kill the two escaped Geass users . They use Knightmares to burn down the village, killing all the villagers, except for Orpheus , who was protected by Euliya . While dying in his arms, Euliya used her last breath to ask him to "live", a wish that Orpheus would strive to accomplish, despite his sorrow at her death.

Orpheus agreed to a date with Monica. They ended up missing their date and died before they learned they were enemies.

Orpheus's Geass, given to him by V.V. before he escaped from the Geass Order, gives him the power to "become" any person he chooses. When activated, he completely takes on not only the appearance of someone else, but also their voice and gestures. This Geass functions by tricking the brains of everyone who sees him. (Range is unknown, but presumably this power does not work when seen by a camera.)

The weakness of this Geass is its 5-minute time limit, after which it will deactivate by itself without any warning, thereby preventing Orpheus from accurately timing this Geass usage . If he tries to activate it a second time in a row, then he will not be able to activate it again until 1 hour later. Despite this, Orpheus believes that these limitations are insignificant in the face of the benefits of this ability.

The amount of time that Orpheus has possessed his Geass is unknown, but for the time being he still remains in control of it. However, some time after he becomes part of the Glinda Knights, his Geass power grows and he loses control of it, and uses a special mask to keep it under control. His Geass has also spread to his other eye. 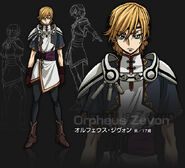 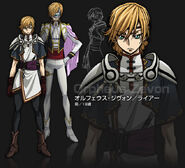 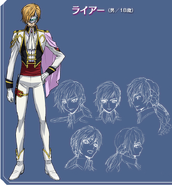 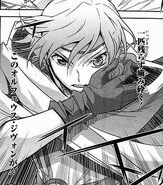 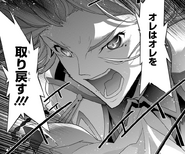 Orpheus with Geass in both eyes 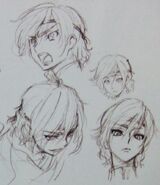 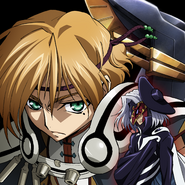 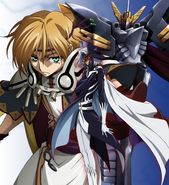 Early cover for SIDE: Orpheus Vol.2

Orpheus disguised as a girl 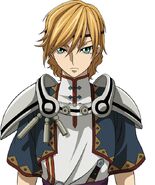 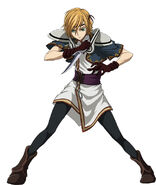 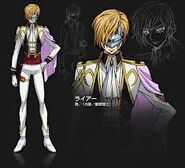