Start a Wiki
Wizard is a mysterious masked man who styles himself as a “magician”, and is a financial supporter of Peace Mark. He possesses vast information and assets, and is said to be very reliable, but his hidden background and identity have many grounds for suspicion. He toys with the two “Oz”s, Oldrin Zevon and Orpheus Zevon, whose identities and pasts he is apparently aware of. He pilots the black Knightmare Frame, Agravain.

In the 4th chapter of the photo story, he is revealed to actually be "Oiaguro Zevon", the uncle of Orpheus and Oldrin, and the head of the minor noble Zevon family. He is also the leader of the Britannian organization "Pluton", which has carried out dirty jobs for the Britannian Imperial Family under the direction of the Zevon family for generations. In addition, he is the one responsible for killing Orpheus' lover Euliya on orders from the Geass Order, and is the enemy that Orpheus hunts and seeks revenge against.

In reality, he is tortured by a guilty conscience for killing his older sister in order to take over as the head of the family five years ago, and furthermore killing his nephew (or so he believed at the time) on a mission. Because of this, he commits the contradictory actions of supporting an anti-Britannian organization under the name of Wizard, despite being the leader of Pluton, and tries to support and protect both Orpheus and Oldrin in various situations as a way of atonement.

Later he tells Marrybell the truth about her past which included V.V. being responsible for Marrybell's family's death which the both collaborate as Marrybell assigns Oiaguro as her personal Knight to replace Lyre.

He later joins Emperor Lelouch's regime and is assigned to aid Marrybell with her control of Damocles. After Lelouch's and Marrybell's death along with Orpheus, Oiaguro joins the newly formed Glinda Knights under Oldrin's leadership. 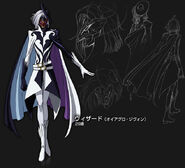 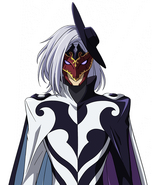 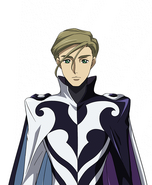 Wizard (Back and Side View) 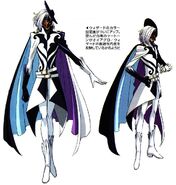 Wizard holding Oldrin
Add an image to this gallery
Retrieved from "https://codegeass.fandom.com/wiki/Oiaguro_Zevon?oldid=73874"
Community content is available under CC-BY-SA unless otherwise noted.