Start a Wiki
Nonette Enneagram (ノネット・エニアグラム, Nonetto Eniaguramu) is a member of the Knights of the Round as the Knight of Nine.

Nonette is a carefree person and has a frank personality. She attended military school with Second Princess Cornelia, who considers Nonette her senior. An upbeat and cheerful woman, she is one of the few people Cornelia actually fears. Her first and last names contain the Latin and Greek prefixes for 9, non- and ennea- respectively. Her last name may also be a reference to the Enneagram of Personality. She first appears in the PSP/PS2 video game, Code Geass: Lost Colors and serve as some sort of mentor or older sister figure to the protagonist if the player decide to choose the Britannian Military route, she is also always seen carrying a pistol with her. It is never shown whether she had ever actually used it, but given her military background, she must have had some proficiency with it. Out of all the Knights of the Round, she is the only one who has no speaking role in the anime. However, she appears as a major supporting character in the second half of Oz the Reflection.

In Oz the Reflection, it is mentioned that she is old friends with Kanon.

She is briefly seen when all the Knights of the Rounds make their first appearance together watching Zero broadcasting his plan to recreate the United States of Japan. She is later seen, along with Gino and Bismarck, watching the broadcast of Lelouch making his ascension to the throne along with Suzaku. It is unknown what happened to Nonette following Lelouch's ascension to the throne, as she does not reappear and is not referenced to either.

Nonette arrives in Area 24 after the Great Glinda Knights' battle against the Star of Madrid. At the request of Kanon, she is to observe Marrybell. After Lelouch's ascension to the throne, she and the rest of the Knights of the Round have a meeting with Schneizel to discuss upon cooperation and afterwards, Bismarck requested Nonette to stay with Schneizel while the entire Knights go and usurp Lelouch from the throne. During the Battle of Mt. Fuji and after discovering Schneizel's true agenda, Nonette rescues Cornelia as per delivery from Kanon and transfers her to Horai Island where the wounded receive treatment. Later on, Nonette and the rest of the Glinda Knights launch an assault on Marrybell and Damocles in order to free the world from Lelouch's tyrannical regime. During the epilogue, she has joined the new Glinda Knights under Oldrin. 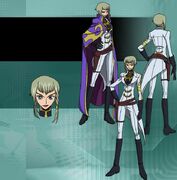 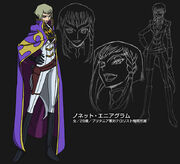 Nonette Enneagram with Cornelia, Guilford and Andreas in Lost Colors. 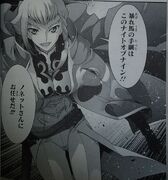 Nonette as she appears in Oz the Reflection

Add an image to this gallery
Retrieved from "https://codegeass.fandom.com/wiki/Nonette_Enneagram?oldid=73871"
Community content is available under CC-BY-SA unless otherwise noted.