Nina Einstein (ニーナ・アインシュタイン, Nīna Ainshutain), 17 years old (18 at R2), is a shy and quiet, yet later maniacal, student at Ashford Academy and a member of the Student Council. In Code Geass R2, she goes to work for the government and create weapons for them. She is the creator of the weapon of mass destruction F.L.E.I.J.A. and later, the countermeasure to it.

Unlike most other female characters in the series, Nina takes little pride in her appearance. Her dark green hair is cut incredibly short, along with two long braids lining downwards and over her shoulders. She also wears round glasses over her indigo eyes, and is typically seen wearing the Ashford Academy uniform.

After the time-skip, Nina's appearance becomes radically disheveled. She is typically seen wearing a ragged red dress with blue hemming and a white cloak, and her hair, while typically clipped up, is now long and shaggy. Occasionally she will also not wear glasses.

Nina's racist mindset is never fully explained in series, as instead of a feeling of superiority, she has an incredible fear and feeling of helplessness when faced by "Elevens". However, certain dialogue in the series may hint that she had a traumatic experience with the Japanese sometime before the events of the series. According to Milly, it is implied that Nina once visited the ghettos and that she was a victim of assault by "elevens" at that time.

She tends to rely on Euphemia for emotional support and views her as a "goddess". After Euphemia's death at the hands of Zero, she became mentally unstable, to the point where she was driven to killing Zero and a more fueled hatred towards "Elevens." However, she later releases this rage when she realized an invention that was the product of her hatred, the F.L.E.I.J.A., was capable of causing the death of 25 million people during the Second Assault on Tokyo Settlement. Nina later forsakes her previous racist mindset and ally with Lelouch and his plan. At the end of the series she is in a wedding photo of Ohgi and Villetta, along with the rest of the characters, in which she is apparently no longer xenophobic.

Nina prefers baggy clothing during season one, but after her confidence boost in season two begins to wear more form fitting outfits as well.

Nina makes her first appearance in the beginning of the first episode of the series at the Ashford Academy, discussing with Milly Ashford and Shirley Fenette about Lelouch's gambling habits, with Shirley highly disapproving it. Milly teases Shirley over her affection for him.

Nina demonstrates an acute xenophobic reaction to Elevens and is initially intimidated by Suzaku when he arrives in the school due to his Honorary Britannian/Eleven status. Arthur, a stray cat, is later chased throughout the school grounds by the entire student body after wandering into the Lamperouge residence and escaping with Lelouch's Zero mask. Milly announced that the one who would catch the cat would get a kiss from any member of the Student Council. Suzaku and Lelouch were the ones that got the cat and got a kiss on the cheek from Nunnally. The Student Council adopts him and builds a cat house in the council room. Following this incident, Nina along with the rest of the student body watches Prince Clovis' funeral on live. During the funeral, the Emperor of Britannia, makes a speech on the virtues of inequality and the social battle for evolution and betterment.

Later, she was at the incident involving the Japanese Liberation Front Hotel Incident. Led by Lieutenant-Colonel Josui Kusakabe, a group from the Japan Liberation Front takes a hotel and its occupants hostage, including Milly Ashford, Nina Einstein, and Shirley Fenette. Zero mounts a rescue operation derails any rescue efforts by the army so he can take credit for the rescue. In a public broadcast, he announces the creation and purpose of his Black Knights, "allies of justice" who will judge the world and protect the weak from "those with power." She develops intense (almost obsessive) feelings for the Third Princess Euphemia after she helps her during a traumatizing hostage incident at the Lake Kawaguchi, Convention Center Hotel. She subsequently comes to rely on Euphemia for emotional support; to emphasize this, Nina is shown masturbating to her picture in episode 12.

Following Euphemia's death, Nina becomes emotionally and mentally unstable. In a misguided attempt to kill Zero and avenge the princess, she arms the Ashford's Ganymede Knightmare Frame with a prototype nuclear reactor, intending to detonate it and take out the school, unaware she might destroy Tokyo in the process. However, it fails to explode when she tries. For everyone's safety, Lloyd has Cecile remove the reactor and has Nina arrested and taken aboard the Avalon.

Later in the second season, Nina is eventually recruited by Schneizel as chief of his In Vogue research team headquartered in Dallas, Texas, thereby leaving Ashford. Schneizel seems to keep her stable by reminding her of how Euphemia would act, doing so in order to exploit her knowledge for his own ambitions. She is first briefly seen in a laboratory, visibly enraged to see that Zero is still alive as "he" (C.C. in disguise) makes his announcement.

Some time later, Nina arrives in the Chinese Federation during the arranged marriage between Prince Odysseus and Empress Tianzi; alongside second Prince Schneizel el Britannia. Milly, not having seen Nina for a while, talks to her; telling Nina that she feels happy for her. However, her attitude turns sour and she snaps on Milly, showing that she was still volatile under her surface. Milly tries to console Nina, but she is too emotional to listen. When she later sees Zero in a chess match with Schneizel, she flies into a homicidal rage and attempts to avenge her "goddess", but is stopped by Kallen and Suzaku. Declaring them traitors, she breaks down and is escorted out. Her memory flashbacks revealed that she too like the rest of the student council had her memories modified by the Emperor believing that Rolo is Lelouch's younger sibling instead of Nunnally. She continues her research into nuclear power, eventually creating a working bomb. The bomb, code named F.L.E.I.J.A., creates an explosion which collapses in on itself, obliterating all matter within its area of effect. (May it be noted that Nina's last name, "Einstein," is a reference to Albert Einstein's endorsement of the atomic bomb, and his later-found regret for his role in the creation of such a weapon.) After its development she has shown an obsession to equip the system to a Knightmare Frame and use it to kill the Black Knights, particularly Zero. After Milly texted Nina about Shirley's death, she can't help but feel sorry and remorse as she breaks down while Kanon comforts her asking about her relationship.

After the second battle of Tokyo, Nina is devastated by the destruction caused by her weapon, which caused casualties exceeding 35 million lives, but Lloyd tells her that she'll have to become detached if she intends to continue being a scientist. She is forced to go into hiding shortly thereafter, as several countries, Britannia included, are searching for her because of her involvement with the creation of F.L.E.I.J.A.

Lelouch enlists her aid in creating a countermeasure to F.L.E.I.J.A., which she successfully completes. She offers to assist him in deploying it, but he refuses to let her, considering it his task for killing Euphemia. Nina admits that she will likely never forgive Zero for that, but needed to find her own answer, to which Lelouch responds by calling her a good person. She is later seen as a prisoner of Emperor Lelouch, along with the rest of the Black Knights and several Lelouch supporters, though she's not slated for execution. She's also seen in the picture of Villetta and Ohgi's wedding, having apparently gotten over her xenophobia.

In Turn 25.01, she is seen with the remaining Student Council at the rebuilt Ashford Academy along with Zero (Suzaku) and Nunnally.

Nina Einstein's character and personality is quite different from the way she is presented in the manga. She shows no obsession towards Euphemia and is still the member of the student council in the second part of the storyline with their memories modified believing Rolo as Lelouch's younger sibling in Nunnally's place. Unlike the anime, she did not develop the F.L.E.I.J.A. warheads.

In PD2, Nina, Milly, and Kallen discuss Nina and Milly's shared childhood: ...Kallen indicates that Nina looks different de-speckled; Milly agrees, noting her forever-held pro-contacts stance on Nina's face before saying, "you little cutie" in reference to Nina. Kallen, confused by Milly's use of "forever", questions her on this point. The gist is that Nina's grandfather was employed by Milly's grandfather, Ruben Ashford, in a Knightmare Frame production company.

The Ashford Company built the Io and Ganymede prototype Knightmares, but a combination of runaway research costs and extravagant continuous parties meant the prototypes were canceled - never hitting the production line. Inevitably, the Ashford company went bankrupt as it had no revenue for recouping its losses. But, fortunately, Ruben's excessive partying paid off as he made many friends and allies. His Japanese contacts proved useful to him in the wake of Marianne's death and Lelouch's exile (which resulted in his nobility, estate, and income being revoked) guaranteeing him and his family a home.

Code Geass: Lelouch of the Resurrection

Nina is one of the many characters to join Lelouch to help save Nunnally. She is shown to have widely (if not entirely) ridden herself of her xenophobia, and works in a team with Lloyd, Cecile, and Sayoko.

In the Picture Drama taking place two weeks after Lelouch leaves with C.C., she teases Kallen about her feelings for Lelouch, while reminiscing her own feelings for Euphemia. 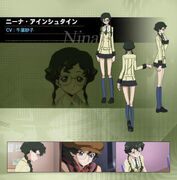 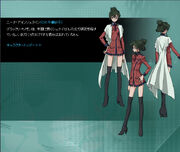 Nina hiding at Ashford Academy, after the second battle of Tokyo.

Nina in the end of The Miraculous Birthday

Nina in Resurrection, going to pilot a Knightmare
Community content is available under CC-BY-SA unless otherwise noted.
Advertisement