Mutsuki Minase (水無瀬むつき, Minase Mutsuki) is one of the new volunteer members of The Black Knights introduced in the second season. She serves aboard the Ikaruga as one of its operators. She wears her hair straight, but with colored beads laced in.

Minase is one of three volunteers along with Ichijiku Hinata and Ayame Futaba to join the Black Knights to serve as an operator. She was present during Viceroy Nunnally's Special Administrative Zone where one million Zeros were exiled from Japan. After being exiled, she appears inside the Ikaruga. She is present during the battles that ensue in the Chinese Federation. She is last seen in a photo of Kaname Ohgi and Villetta Nu's wedding.

Minase Mustsuki and the other operators, operating the Ikaruga 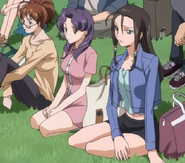 Mustsuki appearing on the far left
Add an image to this gallery
Retrieved from "https://codegeass.fandom.com/wiki/Mutsuki_Minase?oldid=69340"
Community content is available under CC-BY-SA unless otherwise noted.