The Mordred (モルドレッド, Morudoreddo), named after the Knight of the Round Table; is a heavy-artillery Knightmare Frame piloted by Knight of Six, Anya Alstreim.

The Mordred has an integrated Float System, which enables flight. It exchanges speed for thick armor, making it highly durable; it is able to take a direct hit from the Gekka's Katen Yaibatou without being scratched (seen in Operation Pacific Ocean Ambush), whereas any other Knightmare would have been sliced in half. The same cannot be said for the Float System, which can be sheared through with ease (seen in Power of Passion).

It possesses two sets of Hadron Cannons mounted on each shoulder, which are unfolded and merged into a quad-barrel cannon called the Stark Hadron Cannon, focusing their power into a single blast capable of obliterating an aerial cruiser in a single shot. This weapon is usually used on large targets, strong opponents, or enemies within a straight line of fire. It could also be used to entrap an enemy, enabling the cannon to place pressure on that enemy (seen in Final Battle Tokyo II). To attack multiple targets at once (if they are small and/or scattered in different parts of the battlefield) or a fast-moving one(s), the Mordred also possesses miniature proximity missiles, fired from the wrists, chest, hips, and legs which leave purple trails behind as they move. Although lacking in close-range weapons, the Mordred's raw strength allows it to crush other smaller Knightmares with ease.

It participated in many battles, including the Second Assault on Tokyo Settlement and the Battle of Mt. Fuji. The Mordred was heavily damaged by the remains of Jeremiah Gottwald's Sutherland Sieg during the last episode (Re;), having both of its arms and its head blown off; leaving the cockpit breached and exposed yet the damage was not too severe as the Integrated Float System remained functional.

Mordred is activating its Blaze Luminous. 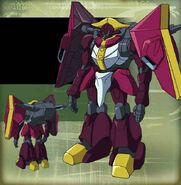 Design 2
Add an image to this gallery
Retrieved from "https://codegeass.fandom.com/wiki/Mordred?oldid=68454"
Community content is available under CC-BY-SA unless otherwise noted.