Code Geass Wiki
Register
Don't have an account?
Sign In
Advertisement
in: Characters, Imperial Family, Knights of the Round,
and 5 more

Marianne vi Britannia (マリアンヌ ヴィ ブリタニア, Mariannu vui Buritania), 37 years old (28 or 29 at the time of her "death" in a.t.b. 2009), was the late Empress of the Holy Britannian Empire, a former member of the Knights of the Round by holding the title of Knight of Six, and one of the founders of the Ragnarök Connection. She also was the fifth wife of Charles zi Britannia and was the mother of Lelouch vi Britannia and Nunnally vi Britannia.

Marianne was a beautiful young woman who had a slim yet strong build, a tall height, and fair skin. Like her son Lelouch, she had big violet eyes and black hair, although she had it much longer and wavier.

As the Empress, Marianne wore fashionable dresses from elegant blue colors with slightly extravagant accessories to more simple outfits such as a long light orange dress. As a knight, she wore an older white version of the britannian military uniform at battle, while wearing other elegant dresses during her free time.

Because of her death, little is known about Marianne, besides the fact she was the mother of Lelouch and Nunnally vi Britannia, Imperial Consort of the 98th Emperor of Britannia, and a former member of Knights of the Round. She was an aesthetically beautiful woman, and as early Code Geass side materials portray her, sweet and kind-hearted, with a rebellious spirit and a deep protective feelings towards her children. Lelouch gives two examples of this: in one she rode a horse into the palace's great hall and in the other she picked a fight with several of the Emperor's other wives all at once. In a flashback from one of the novels, she uses her Knightmare Frame, the Ganymede, to intimidate a fellow consort who had been harassing Lelouch and Nunnally — all the while maintaining her friendly disposition.

Later side materials revealed her true nature as a selfish, heartless former member of Knights of the Round who helped to overthrow the previous Emperor of Britannia and install Charles as the 98th Emperor. She only superficially loves her children and will not hesitate to kill them if they get in her way, having the same beliefs of a world without lies and complete control which her husband also has. Her conversations with C.C., one-sided in the anime but scripted out by the staff (and actually revealed in the Nintendo DS game), show that Marianne has a playful side, often teasing the immortal girl when she tries to deny any sort of attachment to Lelouch.

At some point in her youth, Marianne met the princes Charles zi Britannia and V.V, along with the "immortal witch" C.C., sharing the same beliefs as the first two. Eventually, she became one of Charles' main supporters and closest allies for their plan. She had also piloted one of the earliest Knightmare Frames, the Ganymede, which was developed by the Ashford family. She was well known for her superior Knightmare Frame piloting skills, becoming a member of the Knights of the Round thanks to these skills.

Shortly after gaining the throne for Charles, Marianne got married with him, eventually giving birth to Lelouch and Nunnally vi Britannia. However, her commoner status by birth caused her to earn the jealousy of other imperial wives and nobles, which Lelouch suspected had resulted in her murder, though his further investigation revealed that several members of the Imperial House not related to her by blood respected and admired Empress Marianne, such as Clovis, Euphemia, and especially Cornelia, who idolized her and put a lot of fruitless effort into investigating the assassination. Even some Britannians outside the Imperial Family, such as Jeremiah Gottwald, respected and admired Marianne. It is hinted that her main supporters were the Ashford Foundation, which explains why their social statuses were ruined after her "death" and why they consented to protect Lelouch and Nunnally.

Several times throughout the series, her consciousness has been shown to be communicating with C.C. as a side effect of her Geass.

At the end of season one, Lelouch, by questioning Cornelia using his geass, discovered that Marianne had ordered Cornelia to shut down the security on the day of her attack, implying that she knew about the attack beforehand. It is eventually revealed that the security was lowered by Marianne under the request of V.V., and that he was the real culprit, who attempted to kill Marianne out of jealousy of her relationship with his brother.

Her spirit was revealed to be within Anya Alstreim's body for most of the season. Eventually, Marianne recovered C.C.'s memories and by using the Mordred headed to Kamine Island with C.C. to help Lelouch. While making their way to Lelouch and Charles, they encountered Bismarck Waldstein, who was engaged in battle with the geassed reinforcements of Shinkine Island. Marianne did not want to waste time and so she tricked Bismarck by questioning his loyalty. Knowing that he wouldn't question hers, Bismark believed her, allowing her to lie saying that she would intercept the rebel forces from the ground. C.C. acknowledged Marianne's ability stating that, her nickname "Marianne the Flash" suited her and being the mother of her son Lelouch.

Marianne was revealed to have had a contract with C.C., though she never fulfilled her end of the bargain by becoming immortal through acquiring the Code. After she explained their plan to her son, Marianne attempted to aid Charles in triggering Ragnarök, but was killed when Lelouch uses his Geass to turn the gods on them both. Marianne attempts to stop Lelouch, but Suzaku stops her.

After making a contract with C.C., Marianne gained her own Geass, which allows her to transfer her spirit (along with her Geass) into another person, she used it after being mortally injured by V.V.. If her body was kept intact, there was a possibility that she could have returned to it. A side effect is that, when her consciousness surfaces, she can speak with C.C telepathically.

Marianne had incredible piloting skills, being able to easily control one of the earliest Knightmare Frames at extremely high speeds, which allowed her to become a member of the Knights of the Round and gain the nickname of "Marianne the Flash". Even after several years, she could control a much more advanced Knightmare Frame which had a thick armor, raw strength to crush other smaller Knightmare Frames, and the ability of flight, apart from being able to use its two quad-barrel cannon called the Stark Hadron Cannon by focusing their power into a single blast at large targets or enemies within a straight line of fire. To attack multiple targets at once, she could also shoot miniature proximity missiles, fired from the wrists, chest and hips.

Like her son Lelouch, Marianne was very intelligent. She could easily trick others in order to get her way, which made her a central part of most of her husband's plans.

In Code Geass: Nightmare of Nunnally, Marianne plays a similar role much like her anime counterpart where she possesses Anya Alstreim, who was also her assassin. However, unlike her anime counterpart whose kindness and love towards her children was a mere facade, this Marianne, along with Charles, has genuine love towards her children as she watches over them while possessing Anya; Marianne and her husband had accepted Nunnally's decision, in not killing the Gods, where they accepted their end as they say farewell to their daughter that cries during the parting of her parents.

In Code Geass: Nunnally in Wonderland, Marianne plays the role of the Queen of Hearts. When the King of Hearts (Charles zi Britannia) refuses to let Nunnally go through the castle to get to the path that will allow her to leave Wonderland, the Queen of Hearts appears along with the Knave of Hearts (V.V.). She agrees to let Nunnally go through the castle, but on one condition: Nunnally must play a game of croquet with her. In addition, if Nunnally loses, she will lose her head. However, this is interrupted by the arrival of the White King and Queen (Cornelia li Britannia and Euphemia li Britannia respectively) and the Red King and Queen (Schneizel el Britannia and Kanon Maldini respectively), with both the White Queen and the Red King expressing their different views on croquet. While this is happening, Nunnally manages to slip away and continues towards the exit.

Marianne vi Britannia is in cahoots with Embryo and Gargoyle. Somehow, she found a way to bring herself back to life. As it turns out, she was hiding in Anya's mind the whole time. Also, she pilots a copy of the Mordred when she fights the X-Cross. She gets devoured by Ende after Lelouch geassed her into forgetting about Charles zi Britannia. 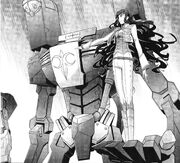 Marianne, as she's portrayed in "Oz the Reflection" 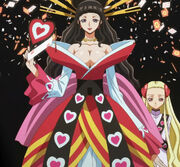 Marianne as Queen of Hearts