Start a Wiki
Margaret Walpole (マーガレット, Māgaretto) is a minor character first seen in Code Geass: The Miraculous Birthday. She is the current President of the United Republic of Europia.

Margaret is first seen alongside Nunnally vi Britannia, Kaguya Sumeragi and Empress Tianzi sitting attending an event referred to as the Warsaw Conference. Schneizel el Britannia, Kanon Maldini, Nagisa Chiba, Zhou Xianglin, and an unnamed woman with glasses who can be assumed to be attending with Margaret.

Code Geass: Lelouch of the Re;surrectionEdit

The four appear to be fairly close, as they are seen together in all of her appearances. They sat together while attending Ohgi and Villetta's wedding. She is seen together with Kaguya and Tianzi during the meteor shower seen around the world after the battle in Zilkhstan. During the end credits, she is seen wearing a with Nunnally and Tianzi, with all three of them wearing a matching outfit.

Though Nunnally initially refers to her formally due to her position, Margaret insists that she simply refer to her by just her name. 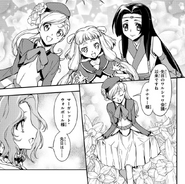 Add an image to this gallery
Retrieved from "https://codegeass.fandom.com/wiki/Margaret_Walpole?oldid=77813"
Community content is available under CC-BY-SA unless otherwise noted.