Mao (マオ, Mao) was a Chinese orphan who was given the power of Geass by C.C.

Mao is a man with medium, silver-white hair with five long bangs hanging over his face. He wears black and purple headphones, two golden earrings and purple sunglasses that cover his eyes, which are both encompassed with Geass.

Underneath his light blue, short jacket with symmetrical gold and blue designs, Mao wears something similar to a long, Chinese linen shirt with maroon sleeves. He wears buckles with straps around his wrists and brown gloves. On Mao's long shirt, he has eight black strips with golden circles on each side, with three of the strips being on his neck and the others going down the front of his chest. Mao would wear long, black trousers with brown boots with two straps on both, and buckles similar to those on his wrists around his calf.

When Mao was a child, he would wear a long-sleeved, mustard-colored turtleneck with medium-length blue trousers and regular black shoes. As a child, he had black eyes.

Originally, as a child, Mao's personality was more or less wholly normal. Having been orphaned, he hadn't experienced familial love. He was also illiterate, and according to C.C., "knew nothing of good and evil". In the little moments shown of Mao as a child, he was shown to be kind and calm. He was shown drawing pictures of C.C. to show how he cared about her. However, in giving Mao his Geass and isolating him, C.C. permanently stunted Mao's emotional growth.

At first glance, Mao seems more or less normal, but thenceforward his mental instability began to deteriorate his mind all the way through the numerous layers of madness. He is shown to be condescending, constantly talking down to others. Due to how having Geass affected his mind and growth, Mao developed a highly twisted sense of morality. He sees any kind of "bad" thoughts as completely abhorrent, to the point where he calls Shirley, an innocent teenager, an "evil witch". He is extremely sadistic, relishing the anguish he causes Lelouch when he threatens to blow up his sister and also when he shoots C.C. multiple times in Clovisland.

Though able to keep up a somewhat reasonable persona in the open he obviously does not belong in crowds, his giddy mannerism and emotionally immature personality coupled with zero empathy make him dangerously unpredictable. As with Lelouch, he has his own opinion on how the world should be, which, for Mao, is a wide-open wasteland with no one in it, other than him and C.C.

Mao was at the age of six when he was given the power of Geass by C.C.. His Geass, like Lelouch's, eventually matured, becoming permanently active. The constant influx of thoughts from the people around him drove him insane. C.C. says she abandoned him because he was not able to fulfill his part of their contract. C.C. never explained what her contract with him was and so it can be assumed that it was the same as Lelouch's, which was for him to kill her. Mao was incapable of killing C.C because his Geass had not or could not reach the final level; C.C implies this when telling Lelouch that "of all the people I've made contracts with, none have reached that level'" while in C's World. In order to compensate for his uncontrolled power, Mao wears sunglasses to disguise his eyes and headphones which repeatedly play recorded words of encouragement and gratitude from C.C. in order to block out the thoughts around him. He even once said that he is a prince on a white stallion and a prince should always save the princess to C.C. The princess he is talking about is C.C herself, as Mao has a deep connection to her.

Mao's Geass made him an outcast, so C.C., being the only person whose mind he could not read, kept him company. As a result of his lack of human contact, Mao is a fairly childish person, a fact only amplified by his insanity. He refuses to accept that C.C. does not love him, and pursues her relentlessly. Mao's mind-reading Geass makes him adept at playing on the insecurities of others to manipulate them. He has a habit of clapping when talking to others, often for no apparent reason, which only further signifies his insanity.

Mao is seen for the first time in the twelfth episode of first season, looking at Shirley and Lelouch from the roofs of the Ashford Academy. Mao makes his first major appearance when Shirley goes to visit her father's grave who died during the Battle of Narita because of the Black Knights.

Using his Geass, he exploited Shirley for using her father's death for an excuse to kiss Lelouch and to get attention. He called her a girl who 'fishes for attention'. He was able to read Shirley and Lelouch's minds. He explains to Shirley that Lelouch has no feelings for her and he already had someone other than her whom he loved dearly.

When Lelouch spots Shirley, he encounters Mao who offers a game of chess. Ultimately, Mao won due to reading Lelouch's mind with his Geass ability. Mao confuses Shirley into believing that killing Lelouch then herself will atone for their sins. Lelouch reasons with Shirley that Mao is just using her and how meaningless this all is. Shirley accidentally shoots Lelouch near the side of his head and it makes him drop Shirley's photos of her and Lelouch. Shirley, more confused, decides to stop this. Mao, dissatisfied, goes back into their cable car to pick up a shotgun, planning to kill them "the old boring way". C.C. reactivates the cable car with Mao inside, moving back down the hill. Mao sees C.C. and promises to come for her soon.

When Mao finally finds C.C. in Area 11, she tries to get rid of him after Lelouch muses that killing him would have been more humane. However, she fails and Lelouch concocts a plan to save her. He broadcasts himself on a monitor in front of Mao, playing with his head by saying that C.C. belongs to him. This makes him act wildly and attacks the monitor. Suddenly, he hears thoughts everywhere then finds police forces surrounding him. He finds Lelouch disguised as one and explains his plan in his thoughts. The broadcast was all an anticipated recording to keep Mao distracted so Lelouch could use the police to get rid of Mao and save C.C. at the same time. Unfortunately, since Lelouch ordered the police to "shoot" instead of "kill", Mao survives with the help of Britannia's advances in medicine.

After escaping custody, he then kidnaps and holds Nunnally hostage in the lower levels of the Ashford Academy, hoping to lure out and eliminate Lelouch in an elaborate game. Lelouch collaborates with Suzaku and devises a plan in which he would distract Mao while Suzaku rescued Nunnally, and then uses his Geass on himself to forget the plan so that Mao would not be able to uncover it by reading his mind.  After his defeat, Mao frantically reads Suzaku's mind, revealing that Suzaku had murdered his own father seven years earlier in order to stop the war against Britannia and that all of the reports stating that Genbu had committed suicide were nothing more than lies. When Suzaku tries to explain why he had to kill his father, Mao proceeds to torment him, saying that Suzaku's reasons for doing so help explain his death wish and that the main reason for all of Suzaku's suicidal actions is because he wants nothing more than to save his own soul and wash the blood off his hands. Not wanting Suzaku to suffer anymore, Lelouch angrily silences Mao permanently with his Geass, and as Mao tries to escape, C.C. appears and tells him that she did love him (as Mao could not speak at the time, his facial expression would imply joy at this) and then tells him to wait for her in C's world. She then kills him with a silenced pistol shot to the neck.

Mao is surprisingly strong despite his little frame, though like Lelouch, he is obviously ill-suited for physical activity. He makes up for this by being an excellent shot which is shown during his showdown with C.C in Clovisland, shooting the gun pointed at him out of her hand before she can pull the trigger. He is also extremely resilient, able to survive multiple shots by several police officers (though he credited his recovery to Britannian medical science).

Mao's Geass power allows him to read the minds of anyone within a spherical range of 500 meters (radius) x 300 meters (height), either all at once or from a specific individual if he concentrates, though his range is reduced when he focuses on a single target. Mao's Geass differs from Lelouch's on several key areas but both allow the user to controlother individuals; Mao controls people by reading their darkest and most inner thoughts, then using his knowledge to manipulate them, as shown through his manipulation of Shirley. However, because his Geass ability cannot be turned off, he often struggles to think for himself unless he listens to his recording of C.C.

Mao dies after multiple firings from the Geassed policemen and Geassed Suzaku earlier.

Mao appears in the flashback as one of C.C.'s contracts whom she said to have the desire to end his loneliness. 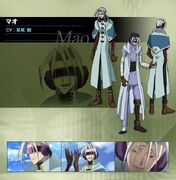 Mao clapping for no apparent reason.

Mao as he appears in the anime.

Mao defeating Lelouch at chess for the second time