The MR-1 is a basic non-combat Knightmare that can fold itself into a more compact form.

Being a non-combat Knightmare, the MR-1 does not have any offensive weapons except for the two chest-mounted Slash Harkens. The only other features it possesses is the Landspinner Propulsion System and a Cockpit Ejection System. However, just like the Ganymede, the MR-1 was used for a basis for the upcoming generation of knightmares.

A white-and-black MR-1 was used by the Black Knights in the rescue of Suzaku Kururugi during the first season. It was piloted by Ohgi, but was destroyed by Kewell Soresi. In the second season, a purple-and-yellow model is used by Ashford Academy instead of the Ganymede. During the festival honoring Knight of Seven Suzaku Kururugi, a second attempt was under way to make the world's largest pizza; the MR-1, intended to be piloted by Suzaku, is commandeered by Gino Weinberg. The pizza is again ruined when Lelouch activates the fire extinguishers to hide C.C.'s presence. 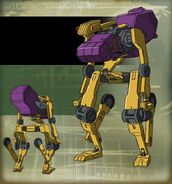 Ashford Academy's unit
Add an image to this gallery
Retrieved from "https://codegeass.fandom.com/wiki/MR-1?oldid=65096"
Community content is available under CC-BY-SA unless otherwise noted.