Luciano Bradley (ルキアーノ・ブラッドリー, Rukiāno Buraddorī) was the Knight of Ten, and was also known as the "Vampire of Britannia".

Luciano Bradley wears a cloak, like the other Knights of the Round except his is orange. Bradley has purple eye pupils and auburn eyebrows. His hair is auburn and worn in a mullet-like style with a single hair hanging down in the middle.

A violent and confrontational man, he was fond of provoking others and attacking without provocation, to the point that he is disliked by several of the other Knights of the Round, including Suzaku. He shows little care for the lives that he ends, regardless of whether they are friend or foe, as long as he can cause destruction. In fact, the main reason that he fights in battles and wars is because he enjoys killing people, even sacrificing his own allies. He claims to be a "Homicide Genius" and carries a number of large knives on his person, which he is adept at throwing. He is fiercely loyal to Britannia, but does as he pleases most of the time, even around members of the Imperial Family.

He pilots a custom Knightmare Frame, the Percival. He seems to have fought on the frontlines of Belarus alongside Suzaku prior to his first appearance in the series. Bradley commands a unit of personal bodyguards known as the Grausam Valkyrie Squadron, a quartet of young women who pilot two-tone pink Vincents. Two known members are Liliana Vergamon and Marika Soresi, sister of Kewell Soresi. Before following Bradley, these two pilots served under Cornelia.

Bradley first appeared shortly before the formation of the UFN, throwing a knife at Suzaku and then insulting Suzaku's love for Euphemia. Later on, he walks in on a conversation between Nunnally and Kallen to tell the latter that she is to be used as a hostage and threatening to harm her because she is apparently expendable. Gino intervened, and was also insulted by Bradley, who suggested that his noble status alone allowed him to reach his position as a Knight of the Round.

During the Kagoshima Settlement Battle, Bradley destroyed a number of the Black Knights' knightmares, and tried to destroy the Da Longdan by throwing a damaged Britannian flagship into it. However, it was intercepted by Xingke. After hearing that Zero and a detachment of the Black Knights are in Tokyo, he asks permission from Bismarck to take the Valkyrie Squadron with him to kill Zero. After gaining permission, he heads off to Tokyo.

After the Mordred suddenly stopped it's attack on the Shinkiro, he attempts to kill Zero with the assistance of the Valkyrie Squadron. Tamaki and his squad tries to intervene and save Zero, but Bradley immediately destroys their knightmares. Unfazed by the distraction, Bradley directs his attention back towards Zero who initially gets a chance to fire at Bradley with the Shinkirō. However, Bradley states that he was waiting for him to do that as the Shinkirō has to lower its shield in order to fire. Before he gets a chance, Kallen, now piloting the Guren S.E.I.T.E.N. Eight Elements arrives in time to stop his attack and destroys the machines piloted by all members of the Valkyrie Squadron. He then engages in a one on one fight with Kallen. After coming in close range, he attempts to use the Percival's head mounted slash harken as a surprise attack. However, Kallen easily destroys it with the Guren's Radiant Wave Surger and then uses it on the Percival, killing Luciano in the process. 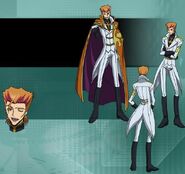 Add an image to this gallery
Retrieved from "https://codegeass.fandom.com/wiki/Luciano_Bradley?oldid=76679"
Community content is available under CC-BY-SA unless otherwise noted.