Liliana Vergamon (リーライナ・ヴェルガモン, Rīriana Berugamon), a blonde, green-eyed woman, was the second member of the Valkyrie Squadron, and was one of the pilots under Luciano Bradley's command.

Prior to her joining the Valkyrie Squadron, she served under Cornelia, along with Marika Soresi, in the Code Geass light novels. She does not appear in the anime.

In 2018, she became one of the Grausam Valkyrie Squadron pilots under Luciano Bradley's command. She was deployed along with the other members and Bismarck Waldstein to the Tokyo Settlement to prepare for the upcoming battle. The Valkyrie squadron combats the detachment of the Black Knights led by Xingke under Bismarck and Luciano during the Kagoshima Settlement Battle. After being notified that the main force of the Black Knights are in the Tokyo Settlement, Luciano asks Bismarck permission for the Valkyrie Squadron and himself to go there. Zero is engaged in battle with the Mordred who suddenly stopped and Luciano takes advantage by having the Valkyrie Squadron immobolize the Shinkirō. However, Liliana is shocked to see herself and the other Valkyries being killed so quickly by Kallen after she escapes her confinement using the Guren S.E.I.T.E.N. Eight Elements. 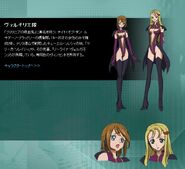 Add an image to this gallery
Retrieved from "https://codegeass.fandom.com/wiki/Liliana_Vergamon?oldid=76948"
Community content is available under CC-BY-SA unless otherwise noted.