Start a Wiki
Leonhardt Steiner (レオンハルト·シュタイナー Reonharuto· shutainā) is a knight belonging to the Glinda Knights. He is a member of the engineering Steiner noble family that runs the conglomerate Steiner Konzern. The Steiner Family also serves Gino Weinberg's family and developed the Bradford, the prototype of the Tristan. That is also why Leonhardt was chosen as the pilot of the Bradford. He has met Gino only once before, during his childhood. He is usually gentle and gentlemanly, but on the battlefield he is bold and has high combat power. However, as a shy person who is no good with women, he is often teased by the female members of the Glinda Knights. He seems to have feelings for Toto, but he ironically already has a fiancée, Marika Soresi.

After the expansion of the Glinda Knights in 2018 a.t.b, Leonhardt was appointed as the Commander of Airbone Knights. 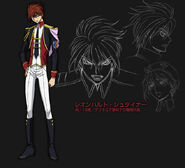 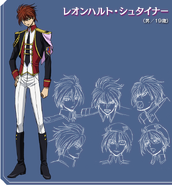 Add an image to this gallery
Retrieved from "https://codegeass.fandom.com/wiki/Leonhardt_Steiner?oldid=74419"
Community content is available under CC-BY-SA unless otherwise noted.