Code Geass: Lelouch of the Rebellion I — InitiationEdit

Shortly after the Zero Requiem, Lelouch's corpse is recovered by Shirley Fenette and given to C.C. and Jeremiah Gottwald. With his corpse, C.C. is able to regenerate new body parts for Lelouch, basically resurrecting him anew and reversing his death. However, Lelouch's memories are trapped within C's world, rendering him vastly incapable of complex actions. He is a shell of his former self and appears to walk without purpose, as well as cower at anything he thinks is a danger.

It is at this point where C.C. becomes Lelouch's caretaker while she hunts down for the nearest, intact Thought Elevator, as the others were destroyed due to Charles zi Britannia.  While protection and basic supplies for Lelouch are provided by Jeremiah, C.C. parts ways with him to lead Lelouch to a Thought Elevator she thinks still exists in the Kingdom of Zilkhstan. Unfortunately, she has to do all the work for survival with Lelouch's reduced capability since he doesn't even have the strength to carry some of their supplies. C.C. has to even cook for him and tell him to eat. Otherwise, he simply lays on the floor with a pillow or with Cheese-kun.

Journey to the Thought ElevatorEdit

Soon, Lelouch and C.C. arrive in the region of Zilkhstan and board up in a hotel. During a news segment, Lelouch shows no sign of reaction when the news tells of Nunnally vi Britannia's kidnapping by unmarked Zilkhstan forces, despite Nunnally being his sister. A few moments later, Lelouch hides by his bed, cowering against the wall while C.C. and an infiltration group consisting of  Kallen Stadtfeld, Sayoko Shinozaki, and Lloyd Asplund fend off Zilkhstan assassins led by Swaile Qujappat.

Afterwards, they are both told by Kallen that they will need to accompany them on the way out. However, Kallen is unaware that C.C.'s companion is Lelouch since he is long thought to be dead. Soon, she has an unexpected, one-sided reunion with Lelouch. C.C. explains Lelouch's situation, and Kallen offers their help due to having similar targets.

Lelouch and company manage to infiltrate the location of the Thought Elevator, which happens to be a temple turned into the Wailing Prison. C.C. leads Lelouch, Kallen, and Sayoko deep underground to the Thought Elevator, an entrance to C's world which has been submerged underwater. With C.C.'s code, he is brought to the Collective Consciousness of Mankind in an attempt to return his memories.

In C's world, it is discovered that the souls are frozen in place, with a dark orb containing Charles' and Marianne vi Britannia's consciousnesses holding on via Lelouch's memories. Lelouch attempts to hide behind C.C. who approaches the orb, causing the Collective Consciousness to attempt to destroy Lelouch completely. C.C. tries to rescue him, but she gets kicked out of C's world without realising she has successfully returned Lelouch's memories.

After returning from C's world with his memories and Geass, Lelouch saves C.C., Sayoko, and Lloyd by telling the prison guards to kill themselves. Soon, he rescues Kallen and is told by Lloyd that Suzaku Kururugi is held in the same position. Lelouch proceeds to Geass a doctor to heal Suzaku, and the two reunite once more. He purposefully gets punched by Suzaku for all the lies and pain he has caused Suzaku.

Due to their infiltration, the prison is surrounded by Zilkhstan's RoyalGuards and Lelouch begins to strategise the obliteration of their enemies by luring them into a trap. He uses Geass on the remaining prison staff to help in his plan in delaying the Zilkhstan forces in time for Lloyd to create a F.L.E.I.J.A. using Warden Belq Batoum Bitool's private Sakuradite supplies. He successfully eliminates Shesthaal Forgnar and the group manages to escape.

Lelouch, C.C., Kallen, Sayoko, and Lloyd journey to a border town occupied by a small contingent of Britannian forces led by Cornelia li Britannia. He dons the role of Zero once more for the upcoming operation and meets with Cornelia, who immediately recognises her half-brother due to Suzaku not being in the Zero suit. Cornelia threatens Lelouch with her sword because of his history as Zero, only to be defended by Shinichirō Tamaki and surprisingly Kaname Ohgi. Lelouch surprises them all by taking off the mask and begging for her help to rescue Nunnally. Furthermore, he states he will no longer lie, as he has no need to now that the world is a better place and Nunnally has her better world. Cornelia accepts and gives complete control of her forces to Lelouch. With the alliance, Kallen calls for a celebration.

It is revealed during the festivities that Lelouch is much gentler than he previously was in his first life. He holds no grudges, even against Ohgi who once betrayed him and believes that the past should stay in the past. Ohgi gives Lelouch data saved by Kaguya Sumeragi in case of his survival.

He holds a pleasant conversation with Suzaku on top of a water tower and watches a video of Ohgi's wedding reception, filmed by Kaguya, which signifies the changes he created. Suzaku admits that the world had been far lonelier without him, but Lelouch warns his best friend that he is unsure how long he has left on Earth, as he could disappear forever the next day.

Lelouch uses his limited forces and Geass to rescue Nunnally, despite the odds of facing 12,000 troops guarding the capital of Zilkhstan, Gralbahd. While his strategy was flawless and he succeeds, he ultimately fails due to Princess Shamna's Geass. Shamna rewinds time by 6 hours with her death and is able to predict Lelouch's every move.

With complete failure, Lelouch nearly freezes with his hurt pride and almost gives up. Fortunately, C.C. talks sense into Lelouch and he is able to regain control of the situation. He creates a theory about a high up official having Geass and creates several strategies to help him find out who's Geass it is, and what it does. With the hypotheticals, he gives C.C. control of the strategy to buy as much time as he can to define Shamna's Geass.

After Lelouch narrows it down to two possibilities, he confronts Shamna on the odds of a coin flip, correctly assuming she can rewind time due to the quick placement of plates over a vent he planned to use. He is able to trick Shamna into thinking they have the same Geass and knocks Shamna unconscious as Lelouch confirms his suspicions.

With the threat of Shamna's Geass eliminated, he proceeds to rescue Nunnally, only to find out that her mind is trapped within C's world. Using Shamna's artificial Thought Elevator, C.C. and Lelouch journey back into C's world to rescue Nunnally. Lelouch finds his sister and holds on to her to keep her from disappearing.

He is successful and wakes up a few days later during the Black Knights' occupation of Zilkhstan. Lelouch tells Nunnally and Suzaku that he can't stay, and returns the role of Zero to his best friend.

He stops C.C. from leaving without any notice, and tells her that he plans on joining her on her journey. He cements his decision to stay with her by saying he'll change his name to L.L., an indirect marriage proposal. While they leave Zilkhstan with a group of refugees, Lelouch and C.C. hold hands.

Lelouch, now going by L.L., and C.C. hunt down the Geass users across the world, taking them down if they don't have the responsibility to have Geass.

After Lelouch regains his soul, he seemingly regains control of his Geass power of absolute obedience, activating and deactivating in both eyes at will, without needing his special contact lenses.

The exact properties of his new power, "Failed One", are currently unknown. It is demonstrated that this power does not provide immunity to geass nor immortality. It does prevent the bearer from aging, giving them eternal youth. The location of the mark varies over time as it wanders over the body. Unlike code bearers, bearers of this new power cannot retract someone's geass power. Currently, Shamna and Lelouch are the only bearers of this new power. 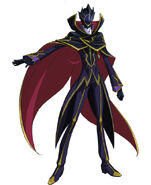 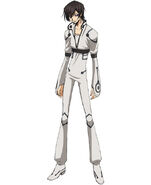 Lelouch after his resurrection with his Code of Immortality.

Lelouch without mask, as Zero.

Lelouch's Both eyes Encompassed with Geass(NotPermanently)

Lelouch's geass, shining.
Add an image to this gallery
Retrieved from "https://codegeass.fandom.com/wiki/Lelouch_vi_Britannia_(Re;surrection)?oldid=77651"
Community content is available under CC-BY-SA unless otherwise noted.